Hemi Heaven! An Up Close And Personal Look At The Amazing Array Of Hemi Mopars At The Muscle Car and Corvette Nats 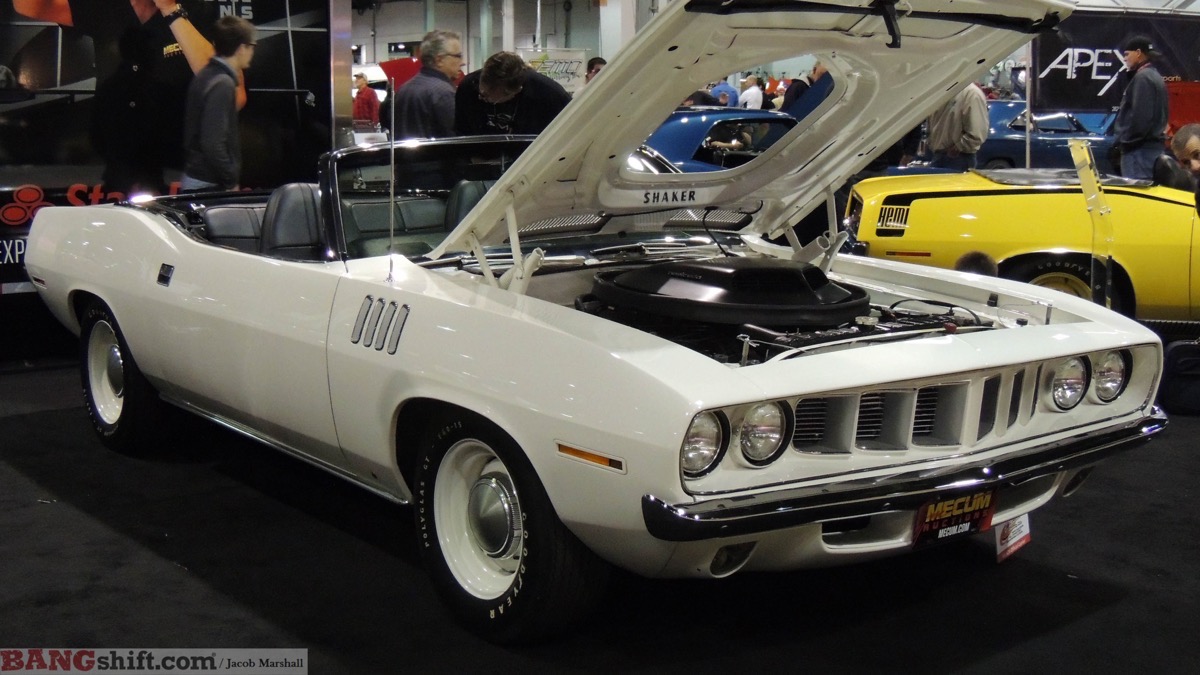 (Words and photos by Jacob Marshall) – As a Mopar guy I have come to accept a few facts in life; everyone assumes you’re crazy, everyone assumes you’re loaded, and everyone assumes your car has a Hemi. While only the first one of those things is usually true, I had a unique opportunity to see all those assumptions come to life at this year’s Muscle Car and Corvette Nationals. As I walked down the aisle that was the entrance to the show, my companion asked me if the cars we were looking at were Hemi’s. I was not only able to say ‘Yes!” but needed to repeat myself nearly thirty times.

Even more incredible was the fact that every one of those cars was a convertible Plymouth ‘Cuda or Dodge Challenger (Chrysler “E-bodies”). For those of you who are new to the muscle car world, or those who have called the underside of a rock their home, Hemi E-body convertibles are some of the most expensive cars in the world. With pristine examples selling in excess of $3,000,000 it’s no surprise that many people associate Mopars with large sums of money. But I hope after reading this you’ll realize that it’s not auction prices that make these cars so incredible.

Hemi cars are a rare bread to begin with. It carried a hefty premium ($800+ on a car that had a roughly $3,000 base price) to receive a Mopar with a VIN declaring “R”, for the 426 cubic inch hemispherical headed monsters. And as a result not many were ordered, and even less as convertibles. But to gain a full understanding of exactly how rare, let’s crunch some numbers. In 1970 Chrysler made 14 Hemi ‘Cuda convertibles and 12 Hemi Challenger convertibles. And in 1971 (the only other year a Hemi was available in E-Bodies) they only made 11 ‘Cudas and 0 Challengers (the biggest engine you could get order for a Challenger vert in ’71 was a 383). As a result, seeing an original Hemi E-body Convertible is about as likely as witnessing Donald Trump, riding a unicorn … across Mexico. Needless to say, witnessing so many in one place, was surreal.

But convertible ‘Cuda’s weren’t the only rare fish in the sea of Barracudas that confronted you at the MCACN. Amongst the elephants were a handful of 1970 AAR ‘Cudas scattered throughout the show. While not quite as scarce as their Hemi counterparts, AAR ‘Cudas were still a rare option in 1970, built with help from Dan Gurney for SCCA Trans Am competition. With a 340 small block topped with a six barrel carburation set up similar to that found on the 440 big blocks of the same era, AAR ‘Cudas were corner carving high RPM screamers. Another unique feature to the AAR ‘Cudas is the presence of two different sized tires front to back, the only Mopar muscle car sold as such (besides the AAR ‘Cuda’s E-Body sister car, the Challenger TA).

While you flip through this gallery of exotic Detroit Iron admiring all the crazy colors and options that were available (bonus Bangshift points if you can name all the high impact colors present!) I want you to focus on one picture in particular: the Plum Crazy 1970 Hemi Challenger convertible with a napping child in the driver’s seat. So many people forget that it’s not about what car you own, all that matters is who you share it with and how. The true value of a car is the sum of its experiences. So next time someone acts pretentious about their car, show them this photo. This child walked up to his family’s (presumably) Hemi Challenger Convertible, opened the door, snuggled up in the original bucket seats, and took a nap. If he can take a nap in 1 of 12 E-body, does anyone have a valid excuse for not sharing their car? They were built to be driven, built to be enjoyed, built to be shared. This is what hotrodding is all about, and sharing such an epic car with the gearheads of tomorrow is 100% Bangshift approved!

Click on the photos below to expand them and then scroll through Hemi heaven!

One thought on “Hemi Heaven! An Up Close And Personal Look At The Amazing Array Of Hemi Mopars At The Muscle Car and Corvette Nats”