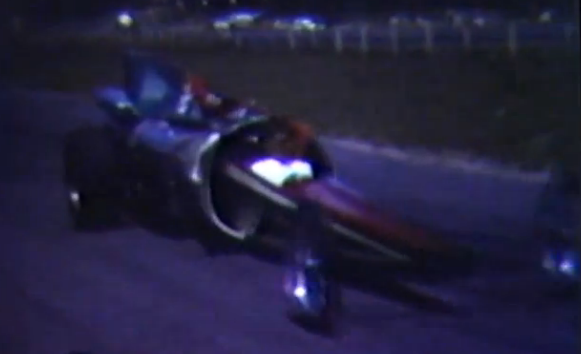 The only thing I love more than vintage drag racing video is vintage drag racing video from my home track of New England Dragway. I have to thank Lawrence Smith for tipping me off to this incredible footage from 1969 at New England Dragway. Why is it incredible? Thus far, it is the only video I can find that shows Art Arfons in his famous “Green Monster” jet car taking on another Arfons creation known as “The Dud”. Fred Hardacre was driving the car in 1969 and sadly it would not be for much longer because he was killed driving another jet powered creation in 1970.

“The Dud” was unique for its time in the fact that it actually looked like a dragster with its long tapered front end. In many ways it predicted the future of what the machines would end up looking like. It was also one of the early adopters of he J-34 power plant which made great power, was lots smaller than the massive J-79 and had less of a propensity to destroy tracks, timing towers, windows, and whatever else had the misfortune of being in the way as it left the starting line.

Additionally, the driver was not riding directly up front like was the standard with most other jet cars of the time (Google image search a photo of the Green Mamba to understand what we mean by this). There is footage of both cars running each other and multiple laps by “The Dud”. Along with the rare jet car stuff, there are plenty of traditional cars as well. Altereds, door cars, you name it. Some of the scenes play in slow motion which makes the cars look like they are running through molasses, but it is just the speed of the tape.

New England Dragway has changed a lot over the years, so it is very cool to see this footage which would have been shot in the track’s fifth year of operation. In the video, you may think that the “guardrail” looks like plumbers pipe. That’s because it is. The guys that built the place still recount stories about screwing it all together. It was basically there for cosmetic reasons, but it was there for a good long time. New England Dragway turns 52-years old in 2018 and will celebrate in fine style with an NHRA Mello Yello Series race this weekend and a host of other events. The place is still rocking, and that rules.

PRESS PLAY BELOW TO SEE SOME AWESOME (SILENT) ARFONS JET CAR VIDEO FROM 1969!