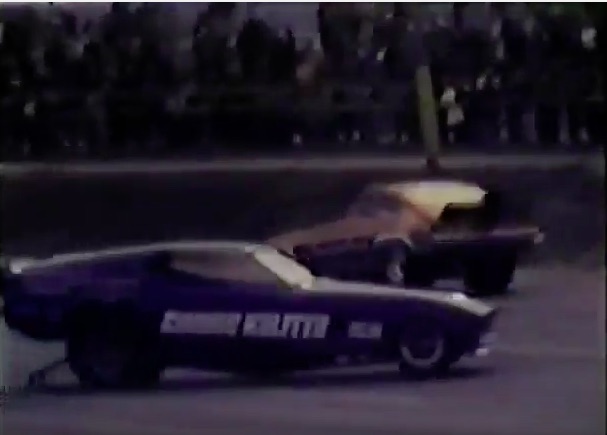 Here’s some fantastic old footage from Detroit Dragway that is cool on about 500 levels. For starters we have two great funny cars in the form of Connie Kalitta and Tom Prock who was driving a car he campaigned with Al Bergler. Kalitta is in the Mustang and Prock is in the good looking Vega. As the 8mm footage kicks off you see both cars starting to do a burnout. Just as Kalitta is about to leave the frame you can see his car make an awkward move. There’s about a second delay and you can see the car go into a broadside slide and end up facing towards the starting line.

Rather than delay or consider what to do next, Kalitta handled the situation perfectly and drove the car right back to the starting line in Prock’s lane, circling onto his side after he got back across the starting line. All of this pretty much happened behind Prock so we’re not sure what he saw of this show or if he missed the whole thing. For the record, we’re not sure that missing the show would be a bad thing in this circumstance!

The coup de grace in this whole circumstance is the fact that once the cars stage up and go ripping down the track, it looks like Kalitta beat up on Prock after he had to pedal at about half course. This is a fun window into not only a great period in time but also a great and very influential drag strip. For obvious reasons, Detroit Dragway was some of the most hotly contested real estate in the world of drag racing. Lots of crazy factory stuff showed up there and some did so in far more clandestine circumstances.

We wish we were in the stands when Connie had this moment. What a cool deal!

One thought on “Historic Drag Video: Watch Connie Kalitta Spin An Accidental Funny Car 180 Back In The Early 1970s!”