Best of 2019: This Simple Video Is A Great Little Learning Lesson About How Interesting Nitromethane Is As A Fuel 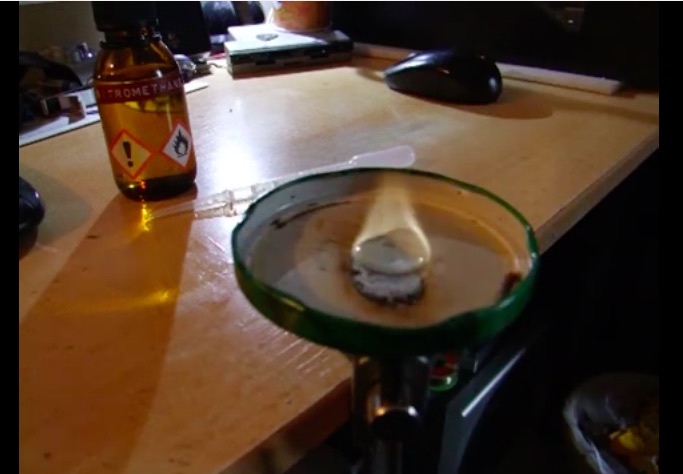 This is a cool video because using a very simple demonstration it vividly illustrates how interesting nitromethane is as a fuel. Obviously it is the foundation for some of the most incredible drag racing action on Earth and it allows those cars to generate more than 10,000hp out of 500ci. On its face the stuff is seemingly uncontrollable, volatile, and bound to ignite and wreak havoc at any moment. While that perception is not totally incorrect, it is pretty flawed and with a lighter, the lid of a pickle jar, and a small blot of nitro, this guy shows us why. He also shows us why teams use the particular starting method that they do, particularly those that are not blown, but only injected on nitromethane.

Let’s talk about an A/Fuel dragster for a second. Those cars start with a supplemental fuel tank attached to the engine that is filled with gasoline or alcohol. The engine is fired off of it and then left to idle for a minute or so. All the whole crewmen are touching the ends of the cylinder heads until they feel them get nice and warm. At that moment, the crew throws the fuel system of the car on and the real fun begins. The engine starts to bang and cackle in the way that us drag racing fans really know and love.

The reason they start the car on a fuel other than nitromethane is because the stuff is virtually impossible to ignite until there’s some heat involved. The car would not fire at best or at worst hydraulic itself in the process if they did not warm the engine before introducing the fuel. That’s the lesson of this video.

You’ll see the lighter touched to the nitro puddle and time or two with no ignition. Then the guy sticks the lighter under the pickle jar lid and heats it up. As soon as the puts the flame to the puddle again it lights off. The second vivid illustration of this video is how slowly nitromethane burns. The puddle does not explode with a fury but rather burns at a very slow rate as we watch. Now you know part of the reason for those huge header flames you see out of top fuel  cars and nitro funny cars. The slow burning fuel, combined with the valve and ignition timing in the engines means that the final part of the combustion process is happening in the full view of everyone, and that rules!

Kind of fun to see what some RC nitro fuel, a pickle jar lid, and a lighter can show you, huh?

5 thoughts on “Best of 2019: This Simple Video Is A Great Little Learning Lesson About How Interesting Nitromethane Is As A Fuel”