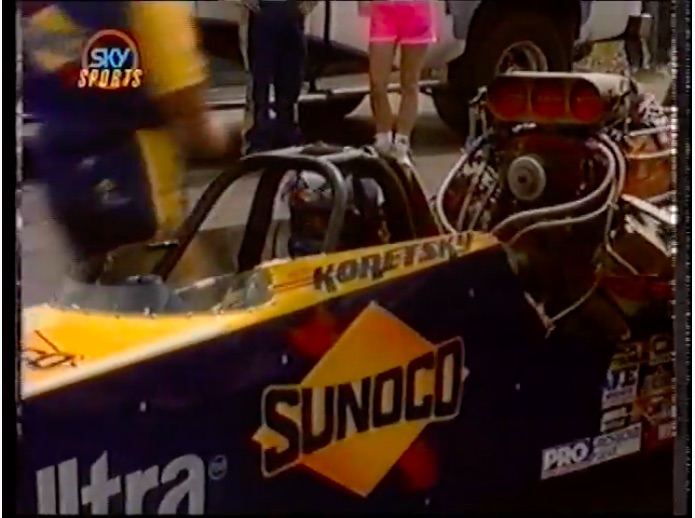 Ahhhh, memories. That’s what this video brought back for me and it also brought back some smiles as well. You are about to watch some 1990 IHRA top fuel action from the then smallish Norwalk Raceway Park. This year Norwalk will not be opening its gates per the track operator Bill Bader, but back in 1990 it was the spot to be if you were an IHRA competitor. This clip which actually comes from an European sports show features eliminations on Sunday at the 1990 IHRA World Nationals. This event would become the IHRA’s version of the US Nationals. Over my time with the company we’d have 1,000 cars on the grounds at the track and it was insane.

Some names to make you smile. Rookie Wayne Bailey would make his mark here and would continue to do it for more than a decade in top fuel drag racing. Kenny Koretsky who was also a top fuel rookie had one hell of a weekend here and you’ll see how it all goes down. Koretsky was a pro stock racer turned top fuel competitor and a good one at that. These days were getting ready to see Kenny’s son Kyle compete in his third season of NHRA pro stock!

Outside of the rookies you’ll see Michael Brotherton, Kenny Bernstein, Gene Snow, Jack Ostrander, and other well established top fuel drag racers of the period getting after it!

Press play below to see some 1990 IHRA top fuel action from Norwalk 30 years ago!

How Not To Drive A Sherp, And How To Save It After It Flips Over Mooneyes New Year’s Party Coverage: Our Photos From SoCal's First Car Show And Race Of The Year Keep Coming!