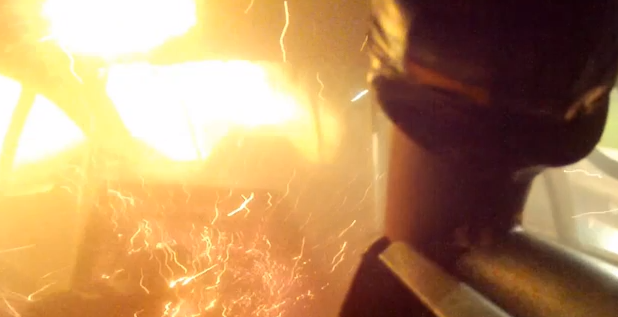 A while back we showed you video of Mark Sheehan’s top fuel dragster bursting into flames in the staging lanes at a drag race this season in Australia. Today we have video of Sheehan from 2012 that shows him experiencing a massive explosion in a nitro funny car at the Perth Motorplex. His top fuel fire was also at Perth, so we’re guessing it is not one of this most favorite places.

This video is awesome because it was shot at night and we get two perspectives. The first is from the stands and what must be a fan’s video camera. The second view is the money shot, from inside the car. You’ll see Sheehan pedal the car quickly at half track and then the thing just goes off like a stick of dynomite, filling the cockpit with sparks, fire, and what had to have been incredible heat. The camera angle is pretty far back in the cockpit so you get a real sense of what’s happening and it surely isn’t good! The slow motion replay is pretty bad ass, as well.

PRESS PLAY BELOW TO SEE THE MAJOR LEAGUE TRAUMA CAUSED BY AN EXPLODING NITRO FUNNY CAR!

Watch A Bill Thomas Cheetah And A Nissan GT-R Battle On A Road Course - Godzilla VS Cheetah! Historical Footage: Throwing The 1974 AMC Matador X Around The Track!