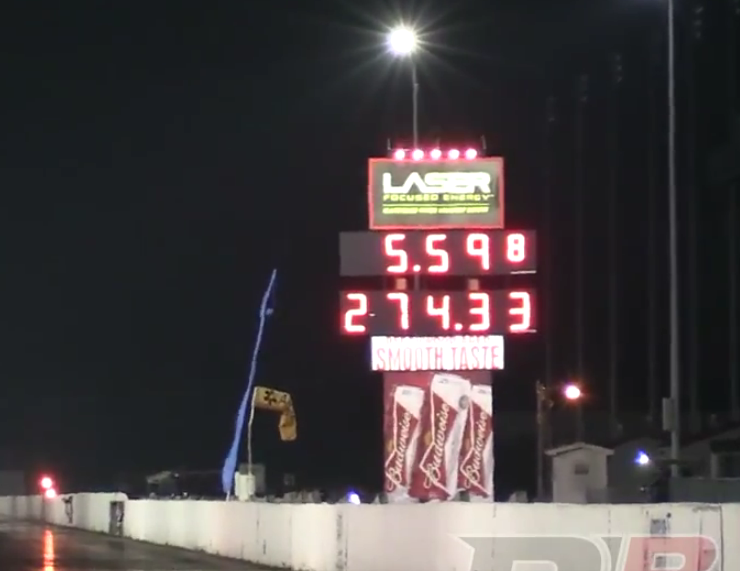 As if the last couple of weeks in the sport of drag racing had not been completely nuts with performance records being challenged and destroyed in multiple genres of the sport, here’s another…and it is a big one. During the PSCA Street Car Super Nationals in St Louis Australian racer Paul Mouhayet driving the ProLine powered Moits Racing Mustang ran 274.33mph to become the fastest door slammer driver in the history of quarter mile drag racing. The craziest part? It may actually go faster! We can say that because during this run, Mouhayet really had to work the wheel and he kept his foot planted when the car made a wild move down track.

Mouhayet has been very fast previously running 273mph and the huge speeds really started coming when Mouhayet began using a torque converter that has full lockup capability. When he ran the 273 it was a Neal Chance billet lockup converter that was in the car and we believe it is still a similar (the same?) unit. When you watch the run and the car tries to get sideways in the middle part of the track, we’re going to speculate and say that is when the thing goes full lockup and begins to apply the full power of the romping, stomping ProLine twin turbo engine until the hood. Like a boss, Mouhayet kept his foot glued like lead to the floor and drove right through it, making a snap steering adjustment to keep the car on course.

It was unthinkable a short time ago to believe that this style of race car could ever run this fast and now 270 runs have become a “thing”. They do not happen often but they have happened several times now with Mouhayet being the guy who has done it more than anyone. The run speaks for itself so go ahead and watch the madness here. The video is great. You will see the thing from the outside first and then you will ride along with Paul and watch him guide the car down course. Pay attention when the thing tries to throw him off like an angry bull and he just corrects like the pro that he is.

Literally amazing. We say this too often probably, but what a time to be a drag racing fan!

REPLAY: FREE Live Streaming Video Of The Street Car Super Nationals St. Louis Right Here!!! Watch This Guy Crash His Honda S2000 At A Weird Autocross And Then Get Really, Really Mad About It In The Car