It’s A Family Thing: Watch The Cutlass On 22″ IROC Wheels Take On A Trans Am Driven By His Father! Ten-Second Side-by-Side Racing! 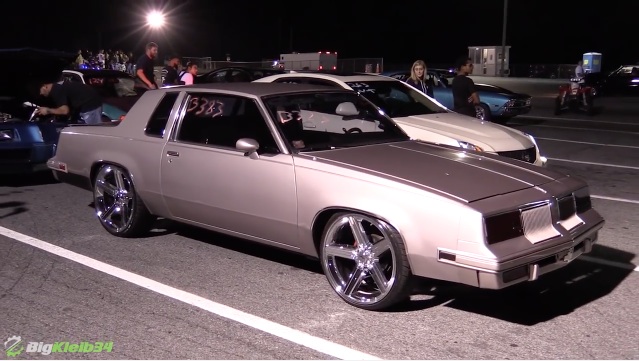 I have a sick fascination with what is going on with this silver-ish G-body Oldsmobile Cutlass. It’s an interesting take on a sleeper: Normally, big wheels and rubber band tires do not equate to a mid-10 quarter mile timeslip, but this Olds, rocking a healthy 400ci Chevrolet small-block, can do it. Yes, it’s slower on the wagon wheels (on proper footwear, this is a nine-second car) but you have to wonder just how many people have been suckered out of some money with that thinking? Mid-tens on a backroad somewhere is money-making territory if you know how to play a poker hand, and from where I sit anyways, I like the way this guy is thinking. And something tells me that thought has gone into this build: the blue late-70s Trans Am that the Cutlass is match-racing at Cecil County Dragway is owned by his father, and it’s just as hot as the Olds is. You don’t suppose that this father-son duo knows a little bit about how to play the game, do you?

One thought on “It’s A Family Thing: Watch The Cutlass On 22″ IROC Wheels Take On A Trans Am Driven By His Father! Ten-Second Side-by-Side Racing!”