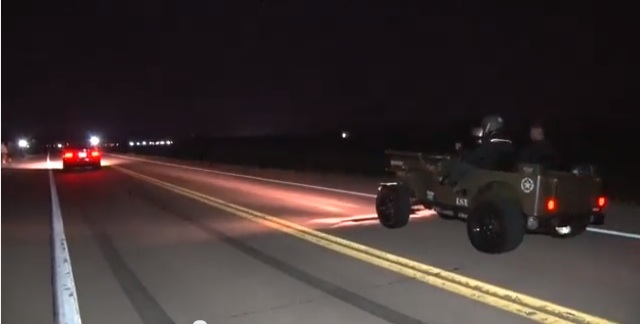 If you know that you are beaten before the fight has even begun, there are a few ways to lessen the damage. One of those methods is through humor…laughter has the ability to cross over lines and reach pretty much everybody involved if the jester knows how to play their cards right. Otherwise, the scene could turn nasty. Take the owner of this red Mustang. He’s up against one of the most infamous rides out there, the LSX Willys. Unless you brought your A-game (and a metric ton of nitrous wouldn’t hurt, either), chances are good that Patton’s Hot Rod is going to take you out. But the driver, from start to finish, makes this a comedy show. Forget the freaking SIX CAR lead that the Willys driver gives him, or that he got distracted by the flashlight guy pointing away from him (“I thought you were pointing at a deer!”) but listen to his statistics. It’s an act, and it’s a good one. This kid is going places. Not on anyone’s “Fastest Rides” list, but there are some open mic nights that could use some fresh talent.

The 2016 Porsche Cayman GT4: The Car That Is Causing Porsche Purists To Scream In Anger This Suzuki Hayabusa Is Turbocharged...Because A Stock Hayabusa Is Just Not Enough, Right?