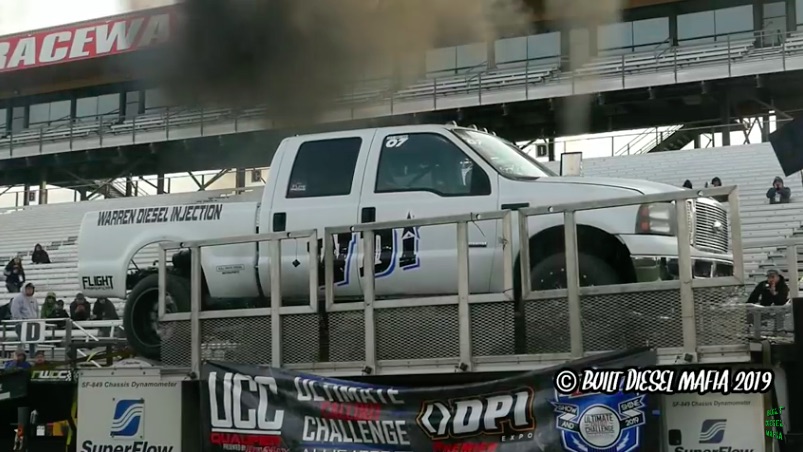 When it comes to engines that wear their reputation around their next like a 50b weight, the 6.0L Power Stroke diesel is one of them. The early versions of the engines were flawed and suffered many different issues with things like the head studs, the cooling system, various leaks, and the list goes on. Trust us, we owned a 2004 Ford with one of those engines and it lived at the dealer before the whole thing was fixed up. We don’t bring that information up to be jerks, we bring it up because guys have really figured out the platform and how to make massive power with an engine lots of people hate.

Jesse Warren of Warren Diesel Injection is one of those guys. I met Jesse several years ago at the Diesel Power Challenge where he was competing with one of his 6.0L wonders and shocking the hell out of everyone in the process. There were other guys at the event with 6.0L trucks but Jesse was really brining the hammers of hell with his. This video is proof that he has not given up on the engine but rather increased his levels of seriousness in making huge power with it.

This video comes from the Ultimate Call Out Challenge in Indy which is pretty much the hardest core diesel performance event on planet Earth. Unlike other events that strive to highlight street legal trucks, this one is all about bringing everything you have and then some.

On this pull, Warren registers the highest horsepower number anyone in the history of the event has managed with a 6.0L Ford engine. That number is 1,910hp which is mental considering these things were coming apart trying to make about 325 back in the days when they were new from the factory.

Extensively reworked and bettered, the thing sounds completely pissed off and it totally is. The stuff coming out of the best at the end of the pull is the contents water injection reservoir as it kind of exploded. Whoops.

Groovy Video: These 1964 Drag Racing Home Videos From So Cal Take Us To Fontana, San Fernando, Lions, and More! Take The Trailer With You: Street And Hot Rod Semi Tractors Pulling In Virginia!