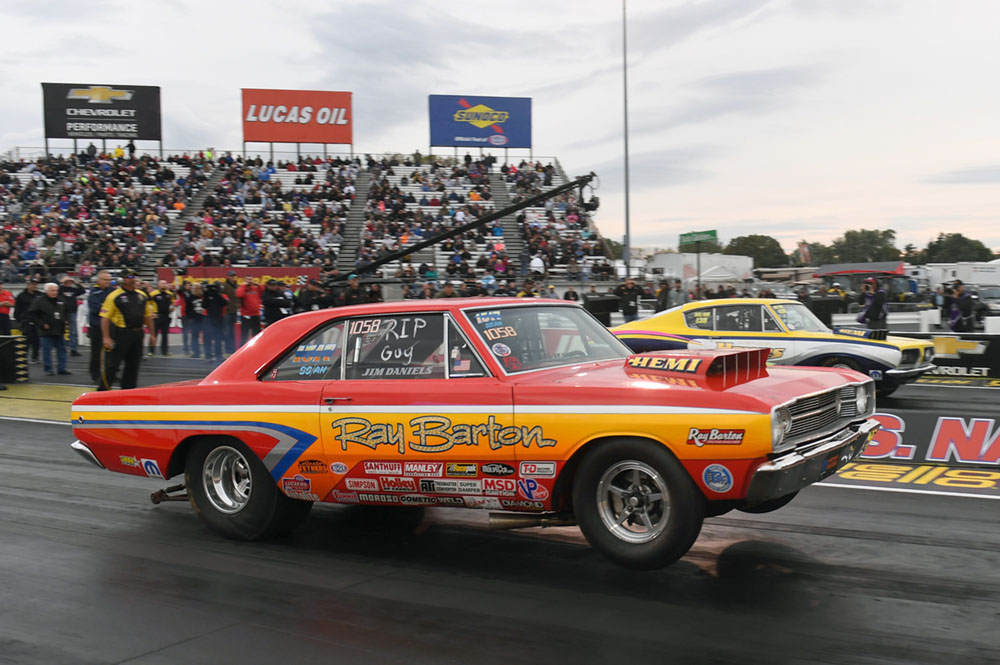 (Photos courtesy of Mopar Motorsports)  Second generation Mopar racer Jimmy Daniels is now two-for-two in the Mopar HEMI® Challenge. The 21-year-old driver from Yardley, Pennsylvania, made his second start in the prestigious annual event on Friday during the NHRA U.S. Nationals at Lucas Oil Raceway at Indianapolis, and drove his 1968 Dodge Dart to the winner’s circle for the second consecutive year.

With the win, Daniels further added to the family legacy in the event started by his father, Jim, who claimed victory in 2010. 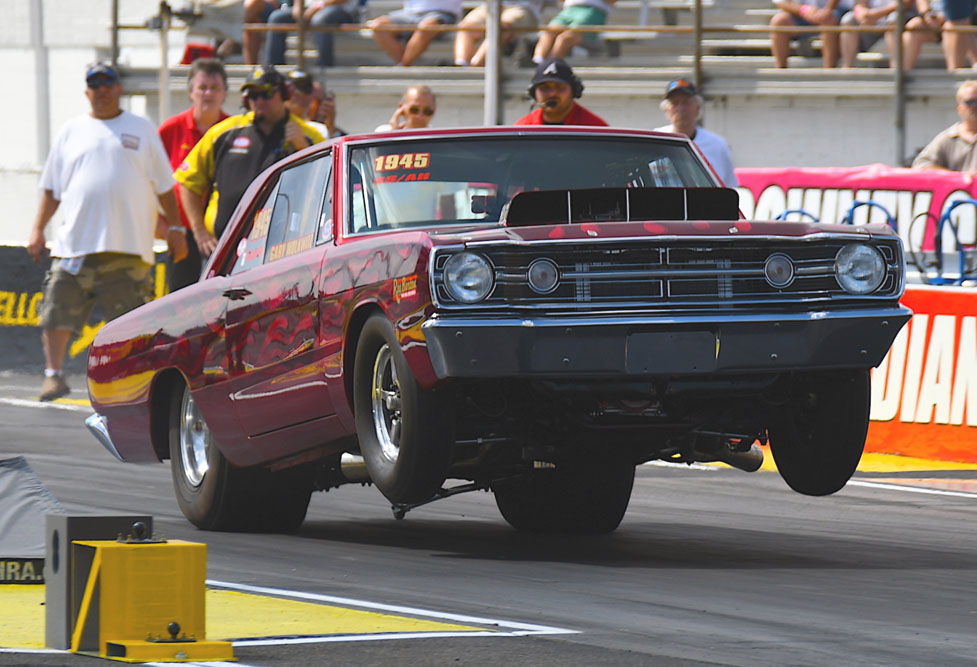 Gary Wolkwitz (above) grabbed the No. 1 qualifying position for the prestigious 17th annual Mopar HEMI® Challenge at the U.S. Nationals, turning in a superb pass of 8.443 seconds in his sleek 1968 Dodge Dart at Lucas Oil Raceway.

“There were some tough cars out here and we weren’t the fastest by a lot,” Daniels said. “I had to be on my game. You couldn’t take anybody lightly here; it was a tough field this year.” 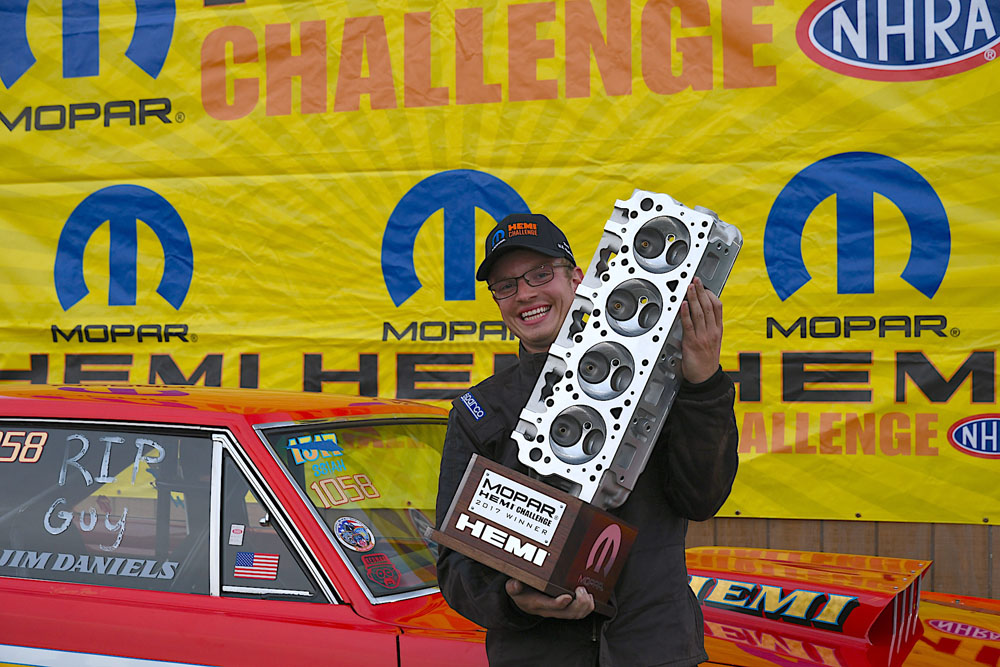 Daniels qualified No. 2 and defeated Bucky Hess’ Barracuda in round one after Hess, the winner of the first-ever Mopar HEMI Challenge in 2001, turned on the red light. Daniels next took down the Barracuda of Gus Mantas, and then bested Steve Comella’s Barracuda with an electrifying holeshot victory to reach the final round.

Daniels was driving the same car his father used to win in 2010, which features HEMI power from Ray Barton Race Engines. The young driver is enrolled at Rider University in Lawrenceville, New Jersey, and leaves for school next Wednesday.

“It’s an unbelievable experience,” Daniels said of winning the Mopar HEMI Challenge for the second consecutive year. “I can’t describe it.”

Although Wendell Howes didn’t claim the top prize at the end of the day, he was still was pleased with a runner-up finish in the premier Sportsman race for the Mopar brand.

“The event was great, I think everybody had a good time,” said Howes, who hails from Rothesbay, New Brunswick. “He (Daniels) went down, I didn’t. As far as the staging goes, it was just a matter of who wanted to blink first.”

Along with his $15,000 payday, Daniels also received a unique trophy weighing 42.6 pounds. The top sixteen finishers in the event received a cash payout, while all competitors were provided with special decals, hats and limited-edition posters. 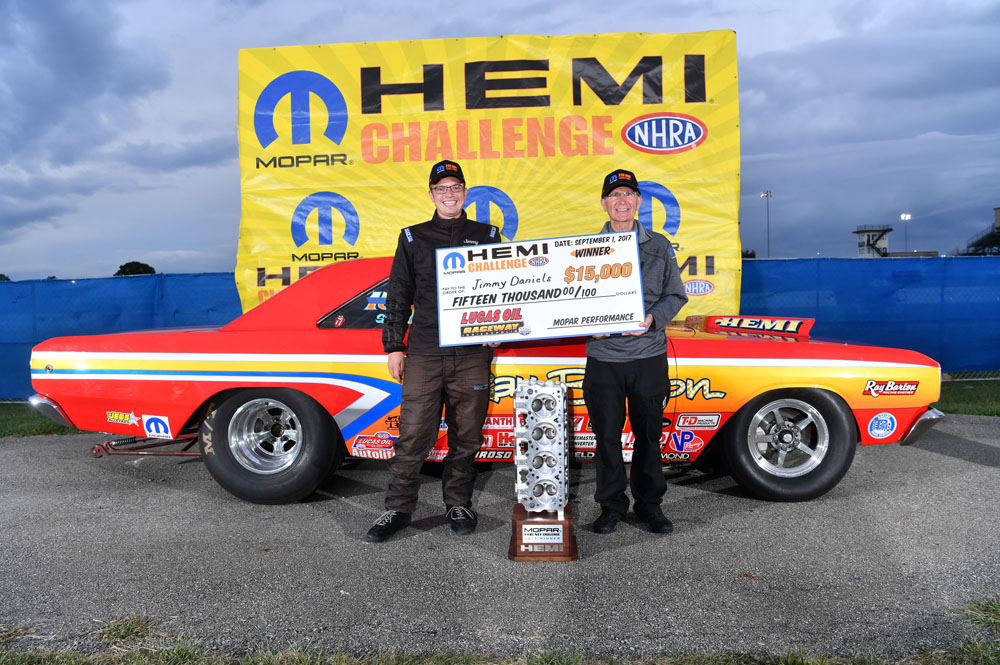 RCR Checks Out The Mercury Marauder, The Taxicab With Attitude! BangShift Tech: Here's How To Install A Tremec T56 Into A G-Body