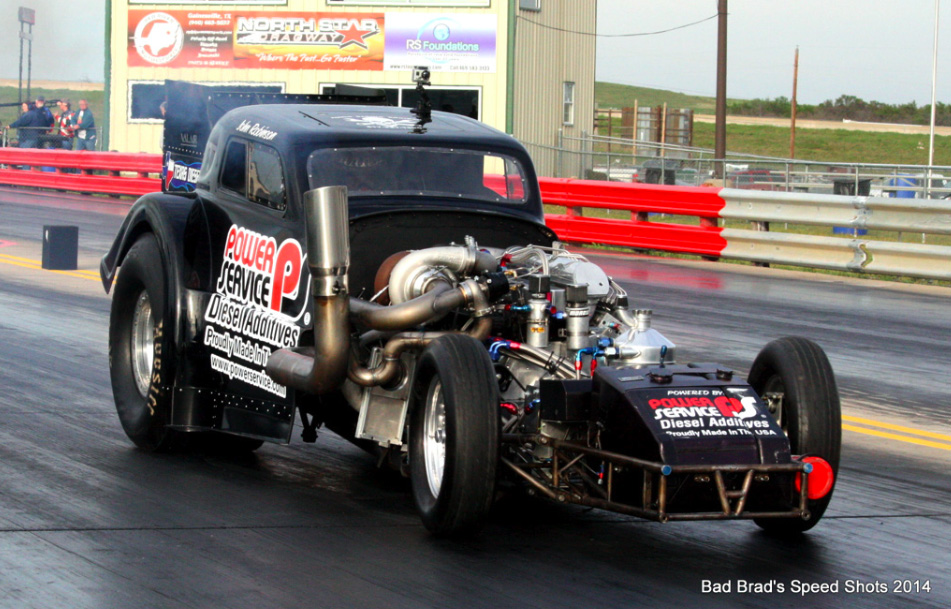 If the name John Robinson sounds vaguely familiar to drag racing fans it is because he’s the guy who campaigned a diesel funny car for several years and did some awesome stuff with it, like run 186mph (and maybe even faster). That car has been around for a few years and there are a bunch of videos of it on YouTube and stuff. We’ve always been impressed with John’s efforts and had the chance to give the flopper a look-see at SEMA a couple years ago and it was a very cool piece, but this altered which may or may not be a new weapon of his really kicks it up a notch. With the big inline six Cummins hanging out in the breeze, it makes an insane statement. Heck, the more we think of it, this car may very well BE the funny car with a coupe body on it. Either way, we’re in love.

We only knew of the car’s existence because of a photos in Brad Klaassen’s gallery which then sent us on a hunt for some video and we found it. The car ran last weekend at North Star Dragway and we dug up some video of one wild run the thing made. We have no idea how quick and/or fast it has been in this configuration and as we mentioned above, it may very well be the funny car with the coupe body on it. What we do know is that this is a brutal machine and if the Outlaw Fuel Altered Association is allowing it to run with them, we salute that group for their open minded approach. If you are into diesel powered stuff, this is totally your jam.

Lonestar Round Up 2014 - Mini-Bike Races, Sweet Hot Rods And Customs, Good Times Using The Flame Throwers On A Hot Rod To Start A Fire Is Dangerously BangShift Approved (Video)