KABOOM! A Pair Of Starting Line Manifold Explosions That Got Everyone’s Attention

Oct 07, 2020Brian Lohnes1320 Videos, BangShift 1320Comments Off on KABOOM! A Pair Of Starting Line Manifold Explosions That Got Everyone’s Attention 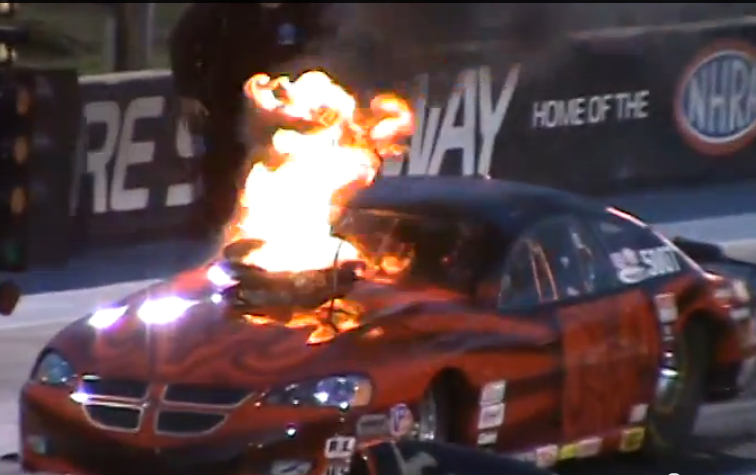 Big nitrous engines provide some of the most entertaining thrills at drag races across the country. When things are on and going right, there are few things cooler than a 900ci engine thundering down the track, shooting fire from the exhaust, and making thousands of horsepower. When things are not right, few things are more spectacularly volatile than that same combination of things. As we have talked about many times, nitrous oxide itself is not all that dangerous of flammable. Its job is to introduce more oxygen into the engine, cool the intake charge, and thereby allow the same engine to burn way more fuel, increasing power exponentially. Unfortunately, at times this process doesn’t exactly go according to plan and when lots of fuel and lots of nitrous ignite in the same place at the same time, things get exciting in a hurry.

The two videos below show a pair of big boomers. While both of them happened at the starting line, the scenarios are different. In the case of the first video we see a Dodge Stratus lined up and ready to roll at Bandimere Speedway in Colorado as part of a Quick 16 event. The car stages, the tree comes down and instead of rocketing off the line the Stratus kind of lurches and then BOOM it launches the scoop like a Saturn V rocket. The scoop flies so high and so quickly the camera guy cannot follow it. A pretty significant jet of fire protrudes from the hood area for a few seconds before being extinguished. In this case it looks like the car went dead lean and perhaps backfired up into the intake, which in-turn ignited the whole load of fuel and nitrous sitting in it. He ferocity of the scoop launch is pretty amazing.

The second video shows Pro Nitrous racer Doug Morales completing a burnout and getting ready to stage his car on what looks to be a cold night at the strip. Morales goes to purge his systems and as soon as he hits the button, BOOM. Lots of guys purge both outside the car and into the motor now. The outside car purge is done to adjust bottle pressure to where they want it and the in-engine purge is done to cause a quick drop in the intake manifold temps to cool the intake charge and pull the nitrous right up to the solenoids so it is there when called upon as the car shoots down the track. Again, in the case of Morales, as soon as he introduced that extra nitrous into the equation, something ignited it all in the plenum of the intake and the result is a massive fireball and a crew guy who totally needs new shorts.

PRESS PLAY BELOW AND SEE SOME BOOMING NITROUS ACTION!

French Delicacy: The Renault-Alpine A110 1600S - Over The Roads Avec Style! Battle Barge: This Buick Park Avenue Has Big Block Olds Power And Is One Sneaky Grudge Machine