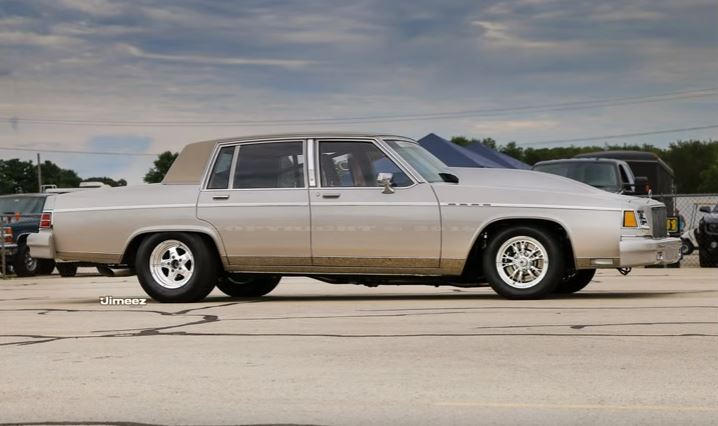 It took me exactly 3.4 seconds to find the video below which was posted on the VictoryRedColorado YouTube page. Shot at Byron Dragway in Illinois this video features an unlikely grudge racing hero. The car is a 1980s Buick Park Avenue that is reportedly powered by a big block Oldsmobile engine on spray. The title of the video claims 10-second elapsed times and we’re thinking that the car may actually be faster than that due to the fact that the driver is clearly off the throttle and on the brakes before the finish line here. Yes, the boards are off but if you have a timer on your cell phone you too can take an educated guess.

The car is ultra clean, has a virtually full interior, and runs through full exhaust. The Olds powered Buick sounds plain wicked sitting there at idle, that’s for sure. We dig the fact that there’s no huge tires or completely over the top combo in this thing. Today we tend to think of grudge cars as tube chassis machines running no prep races and ripping four second elapsed times in the eighth mile. The reality is that cars like this big Buick are the heart and soul of actual “grudge” racing. The other cars are more circus freaks that grab attention but the guys who are hitting the strip, running clocks off, and making some money in the process are the ones driving stuff like this.

We don’t get to see under the hood or under the car but there are some really badass looking tubular front control arms on this sucker the likes of which we have never seen on a B-body before. The car flat out works and we’re loving it!

10 thoughts on “Battle Barge: This Buick Park Avenue Has Big Block Olds Power And Is One Sneaky Grudge Machine”