Like A Boss: Watch This Kiwi Drag Racer Huck His Altered Into A Skid To Prevent Going Long At The Strip 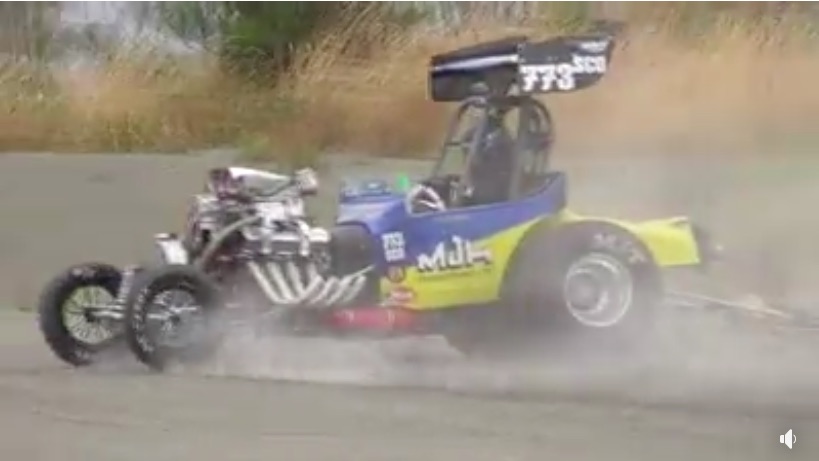 New Zealand’s Neil Morgan was on another pass in his blown Ford T-bodied altered. Another bouncing, half-crazed, short wheelbase charge down the quarter mile that he handled nicely. It was time to hit the parachute and just let things slowly glide down to a stop. One problem. The parachute came out and never blossomed and the end of the track was looking scarier and closer by the millisecond. But Neil Morgan’s not a guy who lives without a plan. Nope, when things looked pretty grim and, well, hopeless he grabbed the brake, threw the car into a slide and drove off the track like he owned the place. THIS is awesome.

When we see situations like this at the track they all seem simple. People who really do not have a clue think that it is no big thing to handle something like this properly and safely. It requires the driver to immediately recognize a problem and work start fixing it with the limited resources that he has. One of the things that seemed to help Neil here is the fact that he (likely on purpose) left the thing in gear or never pressed the clutch pedal in. Normally you don’t hear this much engine braking from a drag car because the driver uncouples the engine from the drivetrain at the top end.

The engine braking and the lack of bouncing from heavy brake application really helped Morgan complete his final act of awesome in this situation. When he throws the altered into a broadside skid and the top end workers applaud for him, that’s about as good as it gets.

One thought on “Like A Boss: Watch This Kiwi Drag Racer Huck His Altered Into A Skid To Prevent Going Long At The Strip”