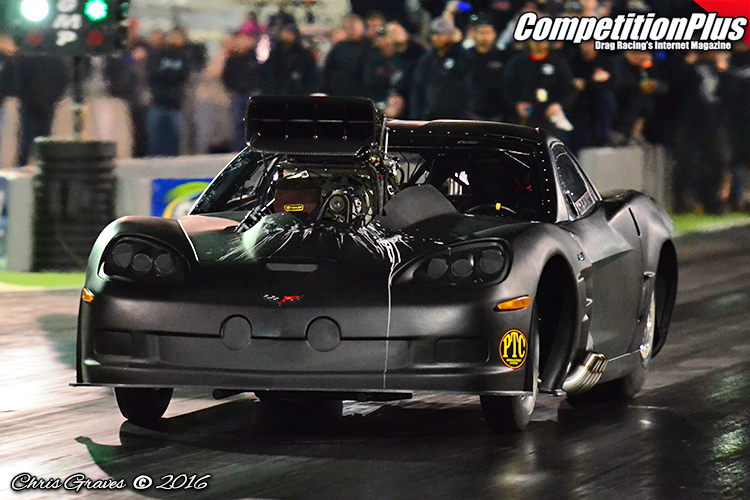 (Photo Credit: Chris Graves/CompetitionPlus.com) – If you have been watching the BangShift.com live streaming broadcast of the RTRA Radial Round Up season opener at North Star Dragway in Denton, Texas than you have seen Texan Kyle Huettel putting on an absolute display of raw horsepower and teamwork. The leader of the Bad9er racing team has been the man to beat in Pro Drag Radial and his Corvette has been nothing short of astonishing, setting and resetting the all time drag radial mark twice over the course of two days as of this writing. by the time he is done the Bill Stockiln tuned Corvette may have turned the trick a third time.

The first record breaker was the 3.875/203.99 miles per shot that Huettel ran on Friday night during qualifying. As you would imagine the run was picture perfect looking with the big screw blown hemi working its magic all the way down the track on the tiny (compared to other classes with this engine combo) rear tires stuck like glue the whole way down. Jason Michalek, Huettel’s teammate with a virtually identical Corvette could not make it to the race so Huettel is flying the Bad9er banner all by himself in the Pro Drag Radial field.

The real jaw dropper came in the first round of eliminations when Huettel dropped a 3.870/202.79 on the field during a bye run. The car hit the tire and carried the front wheels well down the course in a low flying fashion, set them down and powered through the 660′ timing trap in that astonishing time. Is there a 3.86 in the air tonight? We’ll find out. This is getting crazy! 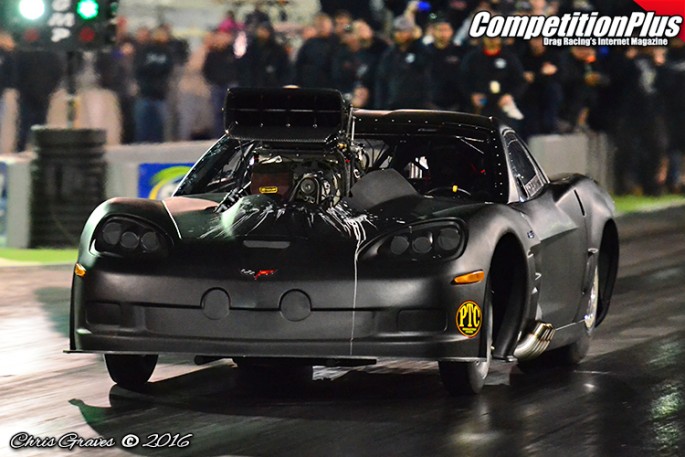 Unhinged: Why Being A Fan Of Non-Mainstream Builds Is An Exercise In Self-Torment FREE LIVE Streaming Drag Radial Racing! 2PM EST START From The Texas Radial Roundup RTRA Season Opener