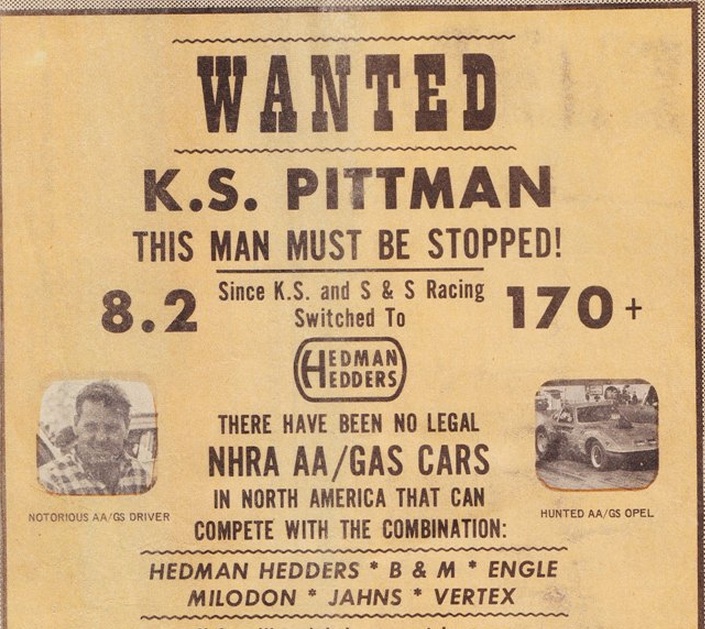 Back in the late 1960s and early 1970s there weren’t all that many places to get your timely drag racing news from. Drag News, National Dragster, and several smaller regional papers like East Coast Drag Times, and others filled the void that places like BangShift and other websites now fill. The cool stuff isn’t just relegated to the race reports. We love all the old ads and match race screamers that fill the pages because they hark back to an era where there really was an element of showmanship in the sport that does not exist today. Even at events like last weekend’s Street Car Super Nationals, one of the more bombastic races in the country, the level of “show” wasn’t exactly high outside of the epic and massive numbers people were running. Please don’t take that as some sort of shot at the race because it isn’t. What it is though is lament. The racers at SCSN are all locked down, pro-level, focused guys who don’t deviate from the program because it could hurt their respective performances.

Back in the day when guys were being paid to show up somewhere, winning and losing were usually immaterial. They were getting paid either way but pride was always a factor. Today’s racers have such massive investment locked up into their stuff that it is a completely different ball game. Consider these ads which were dragged out of old Drag Mags and papers from the 1970s and early 1970s a look back into the fun times that were the days of yore.

Here’s a collection of scans from our sizable archive –

BangShifty Science: Will Shooting A Running Engine With .50 Cal Bullets Stop It? Video: Remember Kids, The Quickest Way Through A Mud Bog Pit Is Over It