Watch This Naturally Aspirated Honda Make More Than 400hp On A 50/50 Nitromethane Blend! 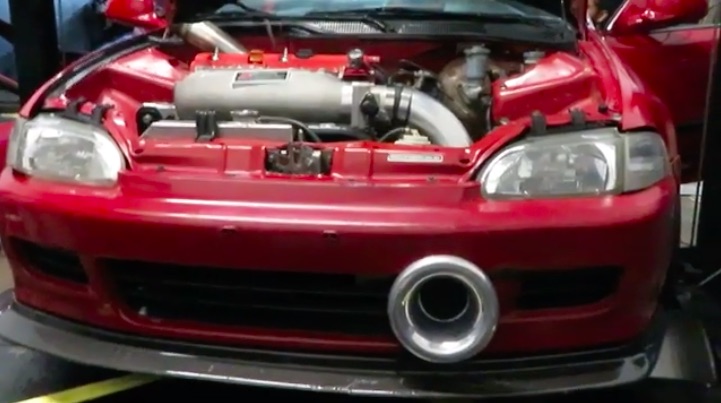 This right here is nasty and proof that nitromethane is the elixir of the horsepower gods no matter what type of engine it is being burned in. The video we see below is cringeworthy at the start but hand with it because the dyno pulls and horsepower this thing makes (along with the nose) are worth the price of admission. So, what are we looking at? Apparently a little Honda Civic that gets street raced a bunch and one that is naturally aspirated, as a 2.4L version of a Honda K engine in it and it’s claimed to be wearing an un-ported cylinder head.

The first pulls are made on VP Racing Fuels M5 which is methanol with some of the companies patented additives in it to make it work better. The car sounds good, makes a really wicked dyno pull and is pretty pissed off for an NA engine of about 146ci. But then the good stuff enters the picture.

The guys flush the fuel system and dump in the VP Racing Fuels 50/50 pre-mixed blend of nitromethane and M5 methanol. The car immediately sounds like a monster and the thing picks up 80hp! EIGHTY from a change of fuel. Not a change of fuel system, but a change of the sauce that came out of the can. How radical is that.

In reading the comments, the car is equipped with a larger than factory fuel pump that has been prepped to handle nitromethane and it is running 2200cc injectors. A brief shot of the engine shows only four injectors. Sometimes with fuels like methanol and nitromethane you’ll see multiple injectors per port but this is a single injector (per hold) setup.

What a hard running little car! With the weight of this Civic, 450hp naturally aspirated and torque for days means it has to be a handful!

Brilliant Machine: Watch This 1890s Era Apple Peeler Get Restored And Used! Cool Stuff! Here's Why Rust Sucks (And Why Selling Stuff Online Does Too!)