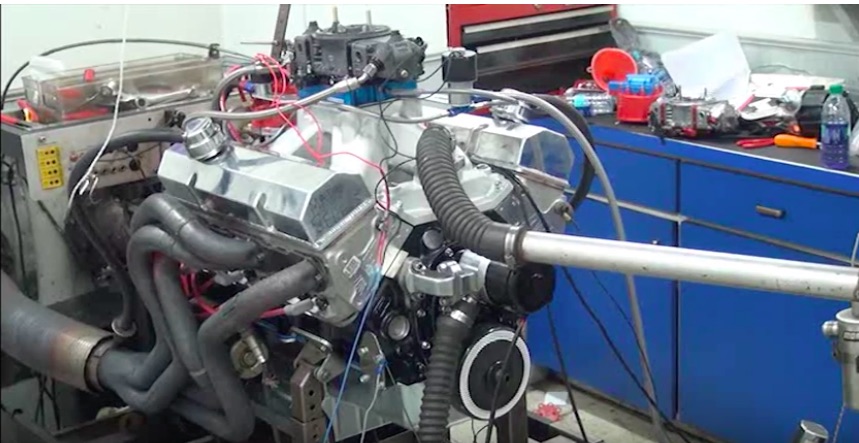 No, the small block is not dead. Hell, the small block is barely ill at this point despite the massive onslaught of LS fever that has gripped hot rodding for what, a decade now? At some point the venerable small block Chevy will start to feel the effects of the invading army but at this point there is still such a huge and vast array of ways to built them, ways to muscle them up, and ways to enjoy them, we’ll be talking about small blocks for decades to come. Proof is here in this video. You are going to see a 434ci small block Chevy based off of a Dart block make just shy of 900hp at 6,700 RPM along with monster torque.

Along with the longer arm in the bottom of the engine to help make that torque and help keep the horsepower peak RPM down, this thing is also huffing nitrous through an Induction Solutions Sledgehammer kit. The whole package is very neat and tidy and it’ll make whatever it goes in absolutely fly. We’re guessing the owner is not a grudge racer as he’d be loathe to let his power numbers out but imagine this thing in a larger style car at the strip and guys are just walking by, peeking into the engine bay, shrugging and moving on. Just another small block. Until it is cranking wheelies and blowing the doors off of more racy looking stuff.

There’s something to be said for simple and we’re not taking anything away from the engine builder here. In fact we’re complimenting them. They did not run this guy up and down a shopping list for a beastly little engine. They went with proven parts in a tried and true package.

Watch this angry small block crank out just shy of 900hp at less than 7,000 RPM

Old Thumper: Watch This 1980s Caterpillar 3408 V8 Make Modern, Solid Power on The Chassis Dyno Iron Trap Model A Shop Truck: It's Back Together And Better Than Ever!