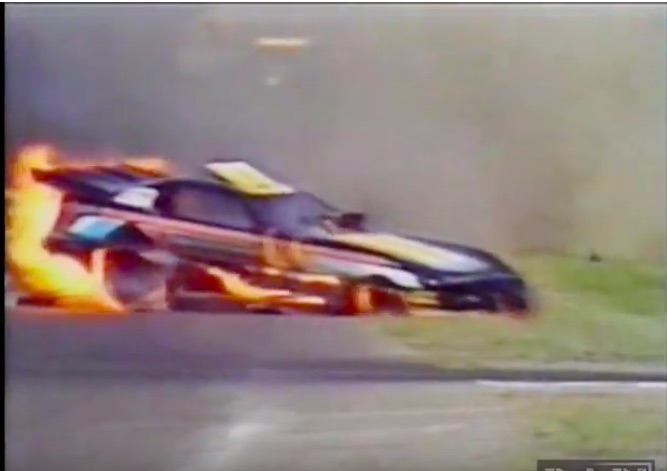 If there is a more nightmarish scenario than being in a burning funny car that’s upside down I don’t know what it is. As you will see in this 1986 video from the NHRA Northstar Nationals, funny car racer Norm Day lived that literal nightmare and was saved by the bravery of safety officials and a fellow driver.

So to set the scene, Day has crossed the finish line at about 250mph and the rods come out of the engine letting oil loose and igniting the whole program in to a speeding comet of hell. As the parachutes burn off and fire engulfs the whole car, Day loses sight of the race track and drifts left. He gets off the course and is making tracks toward a station where safety workers are. They all run for their respective lives.

As the car skids sideways on the grass it kind of digs in and rolls, gently. It had lost so much speed that it just basically flopped onto the roof leaving Day no actual means of escape. Helmeted and suited racer Tim Grose made multiple trips INTO THE FIRE to kick a hole in the side of the body which Day was ultimately dragged through as the Safety Safari drenched the flames with water.

As you will see, Day’s suit was charred black, he had likely sucked in a lot of smoke, and at the moment he was being doused with the hose, had to have been in shock. As you’ll hear Dave McClelland say, Day was back at the track the same day with only minor burns on his hands. Incredible, really.