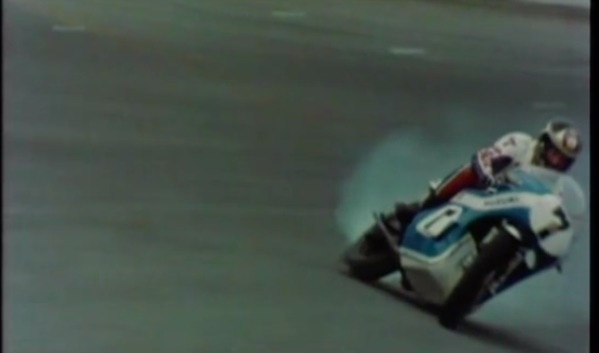 In a decade that produced some of the most bombastic, awesome, over-the-top, and electrifying stars in the world of motorsport, Barry Sheene stands apart amongst his 1970s rockstar peers. The two time world champion motorcycle racer was into all the stuff no one is allowed to be into today as a professional racer. There were the parties, there were the women, there was the fact that he chain-smoked to the point he drilled a hole in the front of his helmet to allow one last heater before hitting the track, and the list goes on and on. 1976 and 1977 saw him climb to the top of the motorcycle racing mountain but it was not without it’s setbacks and challenges. The most horrifying of which was caught on film in this 1975 video.

Practicing for the Daytona race, Sheene was rolling hard on the banked oval portion of the course when the rear tire of his bike failed. As you’ll see, he instinctually reacted, nearly saved the machine (and himself) before being heaved off the bike in a violent high siding incident. Lying as a broken lump on the asphalt of the silent and empty speedway, things looked pretty damned bad.

Cut to the hospital where doctors are looking at his mangled leg and then cut to Sheene in the hospital bed. Young and with a mane of tussled hair, he relays the story of the wreck in the first person and it is electrifying, especially when he says, “It didn’t kill me, hell it didn’t even knock me out…” We’re guessing the drugs were pretty effective in managing what had to have been some hellacious pain from the leg injury and having all the skin ground off his shoulders.

The video crew was in the exact right place at the exact wrong time. The narrator is none other than Murray Walker, one of the greatest announcers in racing history. Walker himself had a life steeped in motorcycle competition. His dad was an Isle of Man TT winner and a hero racer in England when it was the world’s capitol of two wheeled competition.