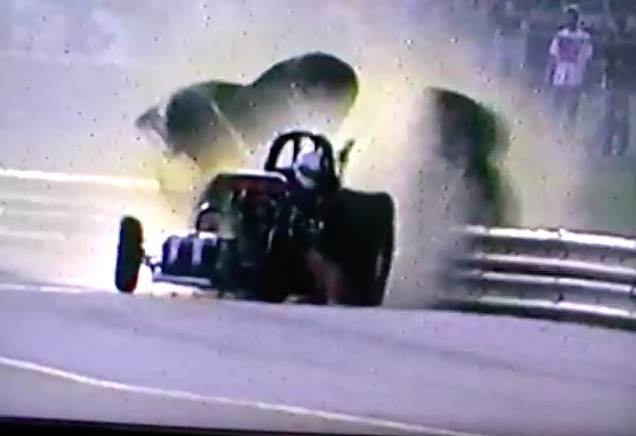 When we look at the funny cars of today versus the funny cars of twenty years ago, the first thing that people notice is the shape. It isn’t like the cars of the 1990s were showroom stock bodied replicas of their street going namesakes but they certainly have an outwardly different look then today’s cars. The major differences come under the body and they range from the huge horsepower that the engines make now to the various safety systems designed to protect drivers during accidents.

The insane Norm Wilding funny car crash from the 1995 NHRA Gatornationals is a perfect example of how things used to be. Wilding was the 1990 FIA champion and through the bulk of the 1990s the British native would run a number of NHRA races a year as well as match racing to support his cause. On this run from the Gators in 1995 things go horribly wrong, Wilding gets knocked unconscious early in the run and he is completely out, flopping around inside the cage as the car careens off the walls.

There is not NEARLY as much free space for drivers to move inside the cages now. High density safety foam prevents their heads from moving around like Wilding’s does, basically ricocheting off the tubing. A HANS device keeps their neck from bashing forward and back as hard as Wilding’s does, and then there’s the added “dashboard” and cowling in front of the driver to protect them from anything coming off the engine and into their lap.

Wilding did recover from this incident but boy is it scary to watch. Thankfully the car did not continue accelerating to the end of the track and then pile into the woods or something. While today’s funny cars look different outside they are vastly changed under the skin.

14 Minutes Of Hell - The Worst Wreck In Vintage Racing History From Every Agonizing Angle Hustling Little Hottie: The 1994 Toyota MR2 Turbo Was Like A Baby Supra With A Price Tag To Match