Nutso Drag Video: In-Car Video Of How To Keep A 250 MPH Door Slammer Out Of The Sand Trap With No ‘Chutes! 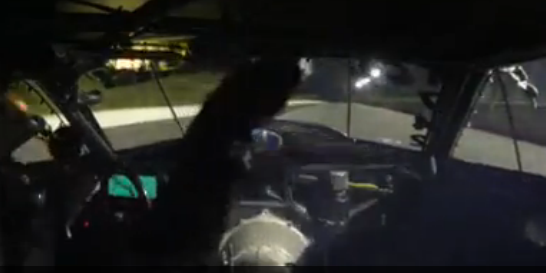 Last weekend at the 2014 Amalie Oil NHRA Gatornationals, Steve Matusek had an interesting time getting his blown pro mod Camaro hauled down before the sand trap without his parachutes. While we didn’t have any in-car video of that experience (which Steve handled like the veteran door slammer pilot that he is) we do have video of another such situation taken from Australia. This footage comes from inside the Proline powered, 250mph proven, Moits Racing Mustang. This car is an absolutely hellacious rocket ship with doors. Last year we showed you the tough end of the Moits racing season when the car shredded a tire and that blown roller chewed the back of the car to pieces.
In this video, you’ll see how split second decision making and a driver keeping his head under pressure can make the difference between a torn up race car and a pretty spectacular save. The run itself is one thing to watch, with driver Paul Mouhayet working the wheel like a rally driver down the entire strip to keep the car on the lane and in the groove. After passing the finish line with a tremendous head of steam, you’ll see Paul hit the parachute launcher button rapidly on the steering wheel and then reach up to manually thrown the chutes out. Neither of those things do much and it then becomes a manual control effort and Paul works the brakes like a champ and actually puts the car into a full drift/slide to keep it out of the sand. He pulls off the trick…but not by much. Had Paul Mouhayet locked up and taken an additional 1-2 seconds, that Mustang would be into the trap, torn to shreds, and laid up in the shop again. Because of his quick thinking actions, none of that stuff happened.
This should be a driver training video. Here’s how you react when stuff goes wrong – Paul Mouhayet owns it!
Post by Moits racing.
Unknown Parts Counter Guy: My Kingdom For A New Hire That Will Actually Work March Meet Bonus Photos From Mike And Jeff Burghardt. There Is Some Sexy Stuff Here!

4 thoughts on “Nutso Drag Video: In-Car Video Of How To Keep A 250 MPH Door Slammer Out Of The Sand Trap With No ‘Chutes!”