This Is The Most Personal, Fun, And Cool Video You’ll Ever See About John Force – A GoPro And His Grandkids – Great Watch 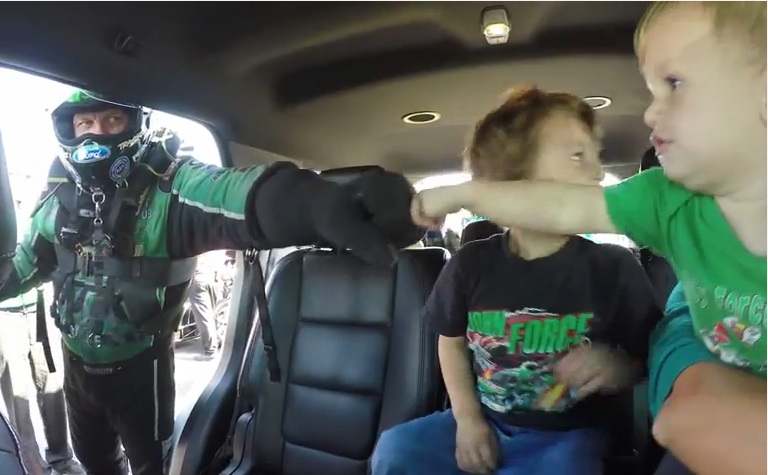 As we are now just days away from Christmas we hope that you’ll either be able to hang out with family, catch up with family, or otherwise surround yourself with people that you love over the span of the next week or so. Speaking of being surrounded by people that you love, this video which is about John Force but actually stars his team, and his bouncing grandkids is really great. It gives a real picture into the Force family and into the guy who has immortalized himself as being one of the greatest to ever don a fire suit. I’ve had the opportunity to see how John interacts with these kids up close and personal and allow me to tell you that this video is not about capturing some “out of the norm” moments. This is how the guy rolls all the time. He loves these boys and they certainly love him. More than once I have gone to stab a mic in John’s face only to see him horsing around with one of the kids in the tow car after a run. He’s a good grand-dad, at least from what I have been able to see when the cameras are off and the microphones are silent.

The guy is as driven and intense a competitor that any form of racing has ever known. He’s coming off a winter where lots of people are counting him out due to crew chief changes, sponsor changes, and all sorts of upheaval in what is one of the largest drag racing operations on Earth. Here’s the thing, you shouldn’t waste a lot of time with that attitude towards Force because as history has proven, the man can find a way to win even under some pretty terrible circumstances. We’re talking times that make recent headlines look like cake and ice cream announcements at a kid’s birthday party.

At this time of his life, John’s core are his daughters, his family, and his crew. These two little guys that love their granddad so much that it just comes across so naturally are a huge part of who he is and why he’s still out there doing it. This video isn’t some PR piece, it is not polished, it is not anything but cool. Give it a watch and we think that you’l dig it.

Question Of The Day: What Car Should Get The Rally Treatment? Just Add Salt: This 1931 Model A May Live In Massachusetts But It Has The True Spirit Of An Ancient Salt Running Hot Rod

4 thoughts on “This Is The Most Personal, Fun, And Cool Video You’ll Ever See About John Force – A GoPro And His Grandkids – Great Watch”