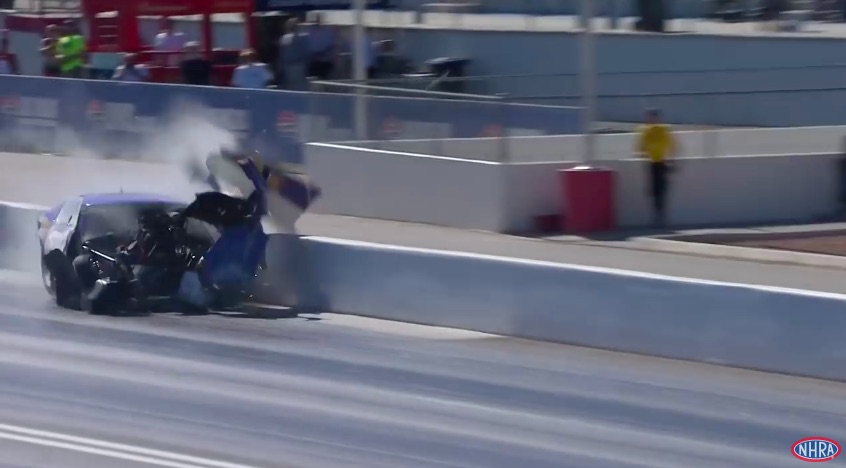 It was a wild end to the 2017 J&A Service Pro Mod  season for Canadian racer Eric Latino in Las Vegas when he suffered a massive crash during qualifying at the event. Latino was able to walk away from the wreck but it left fans stunned at its violence. With more than two dozen cars on the ground attempting to punch into a 16-car field, racers push their equipment to the absolute breaking point to make it into eliminations. Latino’s car came of the starting line well and then had to have suffered some sort of mechanical failure or an issue of that nature as it made one of the most violent right hand turns we have ever seen one of these cars make.

In fact, the car turned so hard that is ran headlong into the wall with a massive thud and then came off the wall and sped across the track to smash the other wall with enough force that those of us who witnessed it were wondering which of the two hits was harder! The car was thoroughly destroyed but Eric Latino, the tough Canadian that he is, came out of the car in one piece and was tended to by the NHRA Safety Safari.

This was a tough break for Eric who is one of the category’s stalwart competitors. His Camaro had carried him to a world record elapsed time in the spring at Gainesville and we’re not sure whether they fix what they have or build a new race car.

We hope to see Eric Latino racing in 2018, we’re sincerely glad he walked away from this mess.

Project Binky Episode 16 Is Here! We Never Imagined An All-Wheel Drive Old School Mini Cooper Could Excite Us This Much Halloween TIG Welding Fun! A Pumpkin Gets TIG Welded!