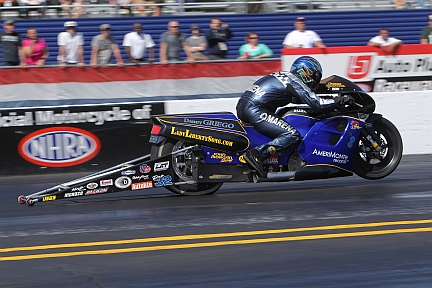 With the 2016 NHRA Mello Yello season kicking off in Pomona last weekend the news around the sport is really clipping along. We have some good news on the pro stock motorcycle front as the crew at Prolong has signed on to sponsor racer Freddie Camarena for the 2016 season. The pro stock motorcycle racers have a 14 race series that they contest beginning at the vaunted Amalie Oil Gator Nationals in Gainesville, Florida.

Camarena has been a stalwart in the class starting off in the late 1990s and with this backing from Prolong he looks to better his best numbers and hopefully collect his first career pro stock motorcycle Wally during the year. Prolong has several competition designed lubricants that are used in applications like nitro funny cars and dragsters as well as naturally aspirated gasoline burning targeted products as well.

Congrats on the deal we we wish Freddie and Prolong great success in 2016.

POMONA, Calif. – Prolong(r) Super Lubricants announces its sponsorship of NHRA Pro Stock motorcycle rider Freddie Camarena.  Camarena has raced a Suzuki in the Pro Stock series since 1999, when he was a finalist for NHRA Rookie of the Year, finishing 14th in the standings after racing at nine of the 14 Pro Stock Bike events that year. Last year, Camarena established his career-best e.t. time of 6.842 at 197.77 mph during the NHRA Four-Wide Nationals at zMAX Dragway in Charlotte, N.C. on March 29, 2015.  His previous career best e.t. was 7.026 set in 2009.

“We are excited to sponsor Camarena as it is a logical connection as Prolong moves into the powersports market,” said Jon Apogée, general manager,  Domestic Sales, Marketing and Motorsports, Prolong Super Lubricants.  According to Camarena, “Prolong’s products and the company’s sponsorship of my program have played an important role in my recent speed improvements as well as in my overall racing career.”