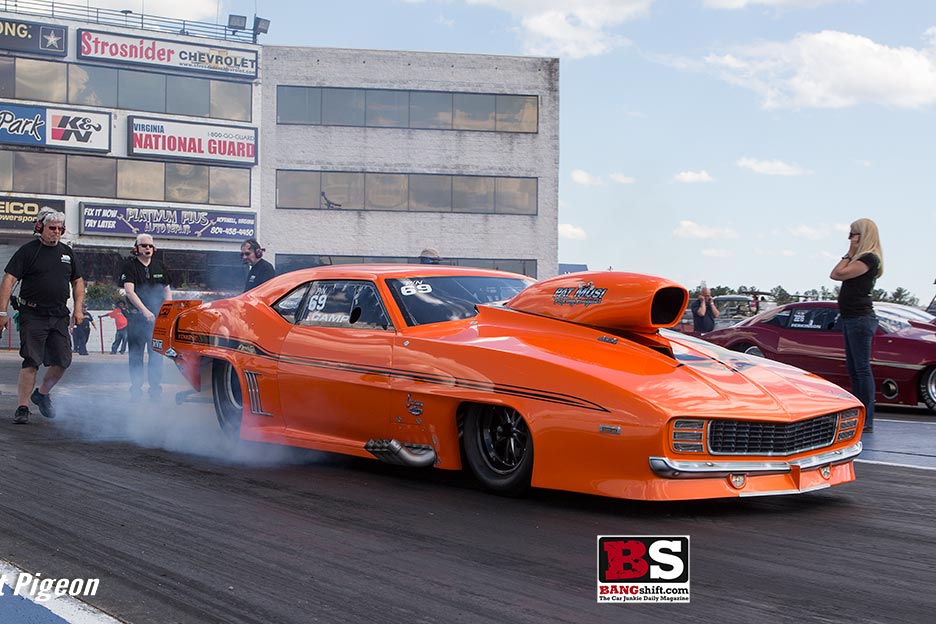 (Words and photos by Benoit Pigeon) – After a few attempts and race cancellations due to weather, the Extreme Outlaw Pro Mod, finally got it’s season start. For a couple times, this year, the North Carolina based organisation will race with the Super Chevy program and this event happened at VMP,  the Dinwiddie track in Virginia where the EOPM has strong roots.   It was the first outing for Randy Weatherford, 2013 EOPM champ and his brand new Camaro. The car, in the nitrous rank, is easily recognizable by it’s lack of a traditional scoop.  In lieu of a scoop, the car has a flat surface that is flush with the top of the injection system.

2015 champ Jay Cox found his way to the finals, only to be defeated by yet another previous year champion, Tommy Franklin from VA. The event was the first as a racer for Lizzy Musi and her King Kong 6 nitrous car and for Pennsylvania based John Camp.  Visiting from Maryland Tommy Gray was the lone contender with a blown entry, the Undertaker. Out of the eight qualified cars, an impressive half of the field had Musi power but in what turned out to be an all champs battle in the finals, it was Buck vs Musi engines and the later took the lead for the 2016 first points standing.  The next race will take place at the freshly renovated track of Darlington on June 25th in South Carolina.

Click the images below to expand them and then scroll with your arrow keys!