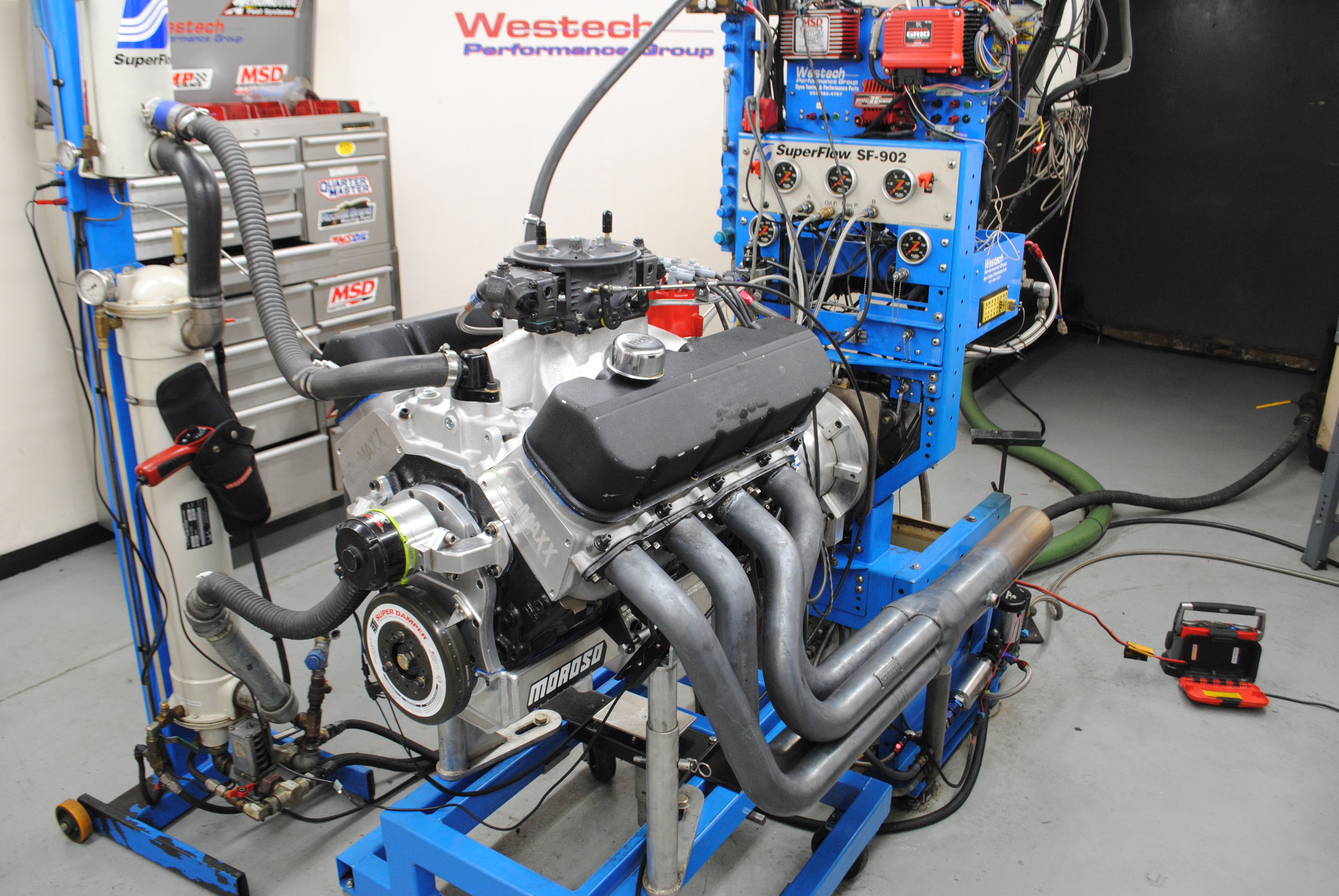 (Words and Photos by Richard Holdener)  What does it take to make big power these days? Well, the easiest route is obviously using some type of power adder like a turbo, supercharger or even the good old standby nitrous oxide. All of these will dramatically boost the power output of almost any type of combination, but what if you want to do it the old fashion way? The all-motor route is a time-honored tradition that, while slightly more difficult than adding boost or juice, is (for many) even more rewarding. Making power without the use of power adders requires considerable effort on the part of the engine builder. All of the critical components must be matched to optimize power in the desired rpm range. Falling short on just one item can ruin an otherwise good combination. Selecting parts that all work in harmony creates a symphony of power that is a joy to behold.

When it comes to power, the best method is to concentrate on the big three, namely heads, cam and intake. This is not to say that the other components like exhaust, carburetion and even the oiling system, are not important, believe us, they are. Books have been written on the importance of each of these subjects, but this dyno session focused on a new set of cylinder heads. Since the internal combustion engine is nothing more than a giant air pump, the more air we can convince our pump to process, the more power it will produce. While this may seem to suggest we maximize the air flow of each individual component, such is not the case. The components must operate in harmony to maximize the flow through the engine. Improvement of one component may or may not improve the whole, which is why racers and engine builders spend so much time testing different combination. 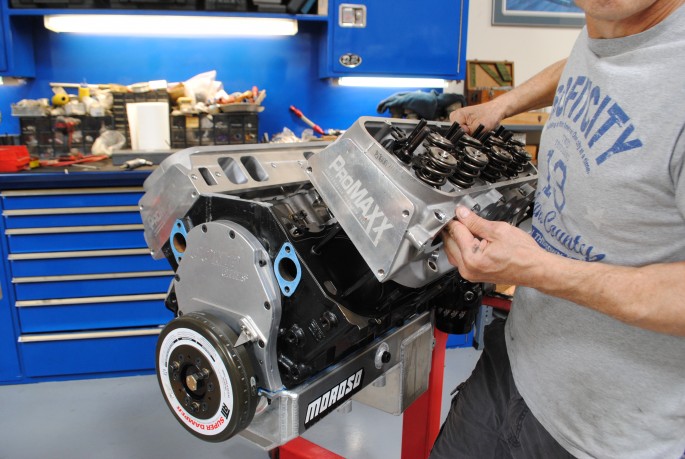 This test session was designed to illustrate the merits of a new set of cylinders heads offered by ProMaxx Performance. When they began, co-owner Jason Collins set some lofty goals for their products. Having come from a solid racing background, Jason decided what racers and enthusiasts needed was affordable performance. The goal was to offer a product line that combined performance, quality and affordability. The combination of the three seemed like a difficult task, but if this test is any indication, the ProMaxx line might just have pulled the hat trick. The specs on our test heads certainly looked impressive on paper. Though ProMaxx offered as-cast and even larger CNC-ported heads featuring 370-cc intake runners, we opted for the CNC-ported, 340-cc versions. As delivered for testing, the ProMaxx 340-cc heads (possible future name-the Shocker Series) featured a 2.30/1.88 stainless (back-cut and swirl polished) valve combo, 122-cc combustion chambers and intake ports that flowed over the magic 400 cfm (peaks of 412 cfm at .900 lift according to their flow bench). Our heads even came decked out with a triple spring package designed to support a roller cam of up to .900 lift. 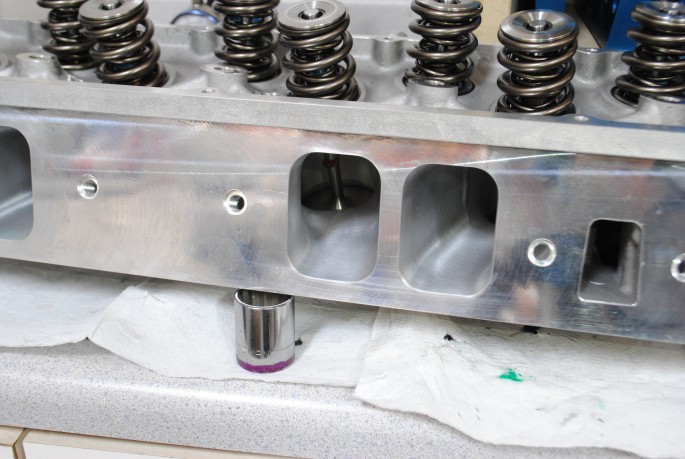 2. Though ProMaxx offers even larger heads that offer even more power potential, we selected a pair of CNC-ported versions that offered 340-cc intake ports that flowed over 400 cfm. 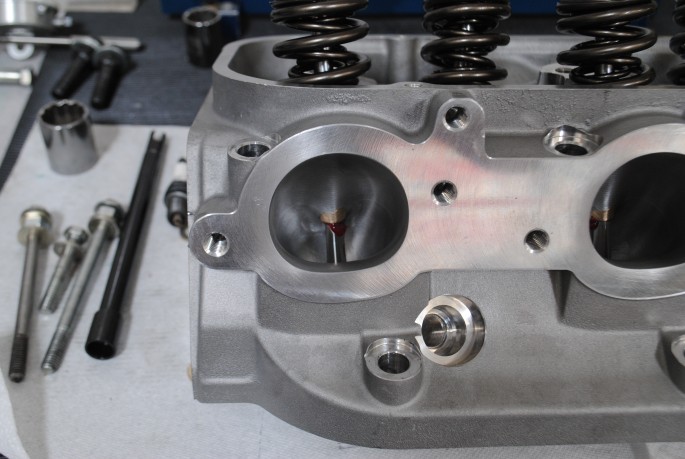 3. The exhaust flow was equally impressive flowing over 300 cfm at .800 lift. 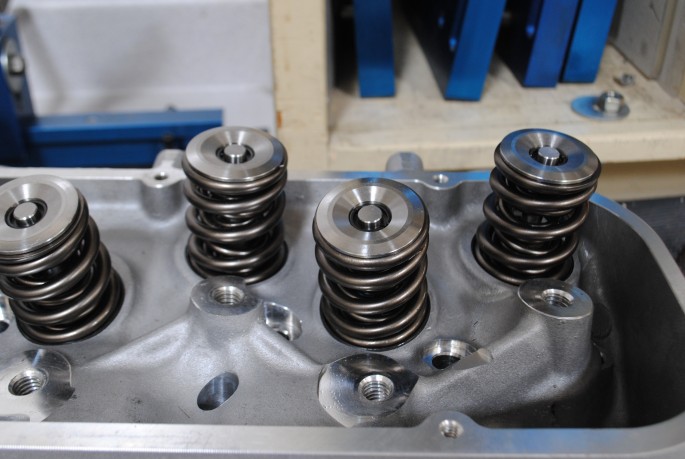 5. These heads were set up with a triple spring package (and Ti retainers) designed for a solid roller cam with as much as .900 lift.

Right off the bat the heads looked and sounded like they were the goods, but only the dyno would confirm whether the “potential” suggested by the flow bench was an empty promise or actual power. To test the merits of the heads, we needed a suitable test motor. On paper, the heads were capable of supporting over 800 horsepower, so we built a motor capable of that level of performance. When it comes to normally aspirated power production, bigger is better, so we naturally stepped up in the displacement of our test mule. Starting with a Dart Big M, we filled the big-bore block with forged internals from Lunati and CP. The Lunati Signature Series, stroker crank (4.375-inch) and 4340 (6.385-inch) forged rods swung 4.560-inch, CP domed, (11.0:1) forged pistons to produce a final displacement of 572 cubic inches. Maximizing ring seal was a Total Seal ring package, dialed to perfection using a ring grinding tool and installed using a ring compressor all from Total Seal. Naturally the big-inch combo needed a healthy cam profile so we reached right for the Comp Cams catalog and selected a solid roller grind that offered a 775/.748 lift split, a 284/292-degree duration split and 112-degree lsa. Comp Cams also supplied a set of Endure-X roller lifters, hardened pushrods and an adjustable, double-roller timing chain. The finishing touch on the bottom end included a two-piece timing cover, an ATI Super Damper. 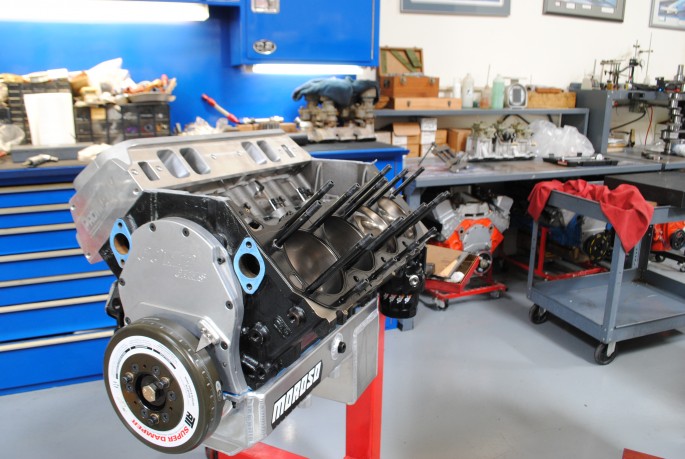 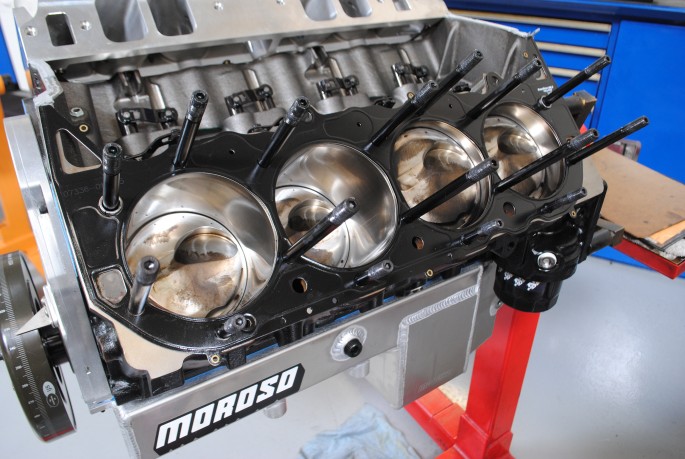 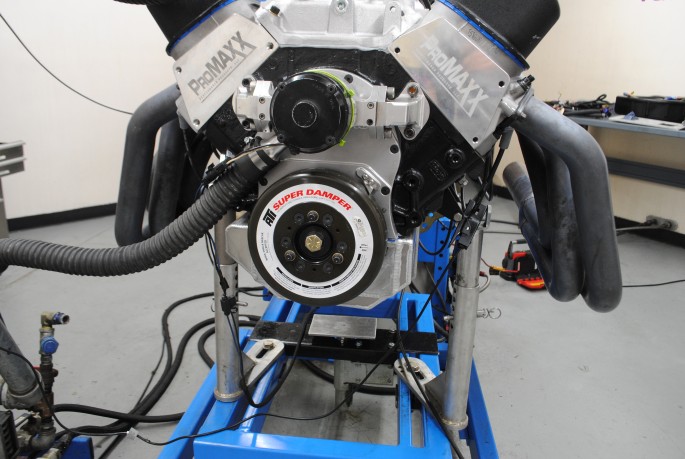 After installation of a complete Moros oiling system, we installed the ProMaxx heads using ARP head studs and Fel Pro MLS heads gaskets. Feeding the heads was an induction combo that included an Edelbrock Super Victor intake manifold and Holley 1050 Ultra Dominator. The single-plane Edelbrock was optimized for power production higher in the rev range, while the Dominator ensured plenty of air and fuel for power production. Sparking the air/fuel mixture was an MSD ignition system that included a Pro Billet distributor, plug wires and Power Grid system. 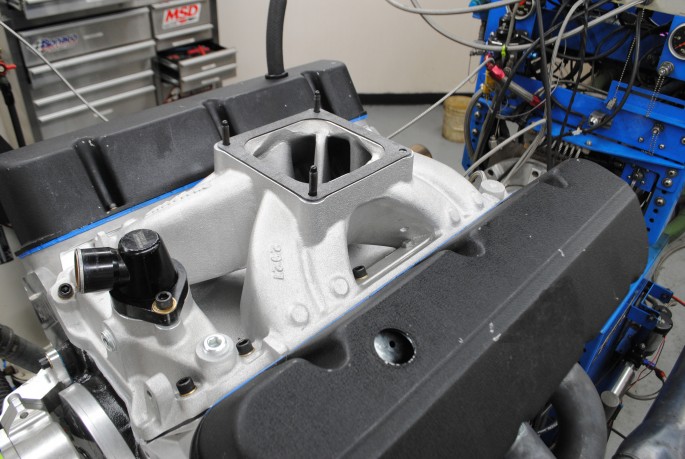 9. Every super-sized stroker needs plenty of airflow so we topped the 572 with an Edelbrock Super Victor intake. The single-plane designed promised (and delivered) a healthy dose of top-end power on our big-block combo. 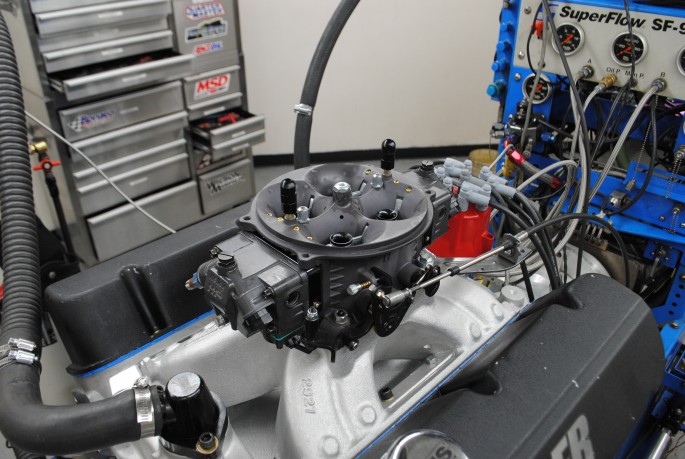 10. Continuing the going-big theme was this 1050 Holley Ultra Dominator carb, while ignition was handled by an MSD billet distributor and plug wires.

After the break-in cycles, the tuning session included adjustments to jetting, timing and even the oil level. When all was said and done, the ProMaxx-headed 572 Big Block produced peak numbers of 850.2 hp at 6,800 rpm and 719 lb-ft of torque at 5,500 rpm. With quality components, plenty of airflow (and power) and affordable pricing that saves enthusiasts an easy $1,000 over the competition, this big-block head has taken performance to the Maxx. ProMaxx! 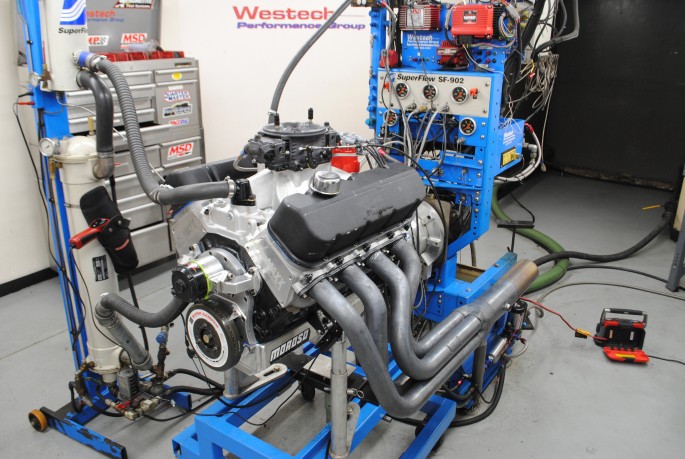 11. The dyno numbers confirm the potential offered by the airflow numbers, as the ProMaxx-headed 572 thumped out peak numbers of 850.2 hp and 719.6 lb-ft of torque. 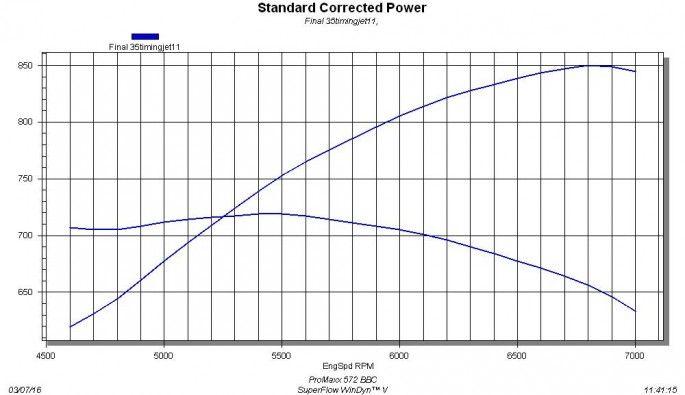 The easiest way to make big power is with a big motor. Nothing thumps out power like a big-block Chevy except an even bigger one. Sporting 572 cubes, this stroker needed plenty of airflow to feed all those extra inches. ProMaxx Performance promised not only plenty of flow but at a significant savings over their competitors. Equipped with their CNC-ported 340-cc BBC heads, this 572 produced a hair over 850 hp and 719 lb-ft of torque.