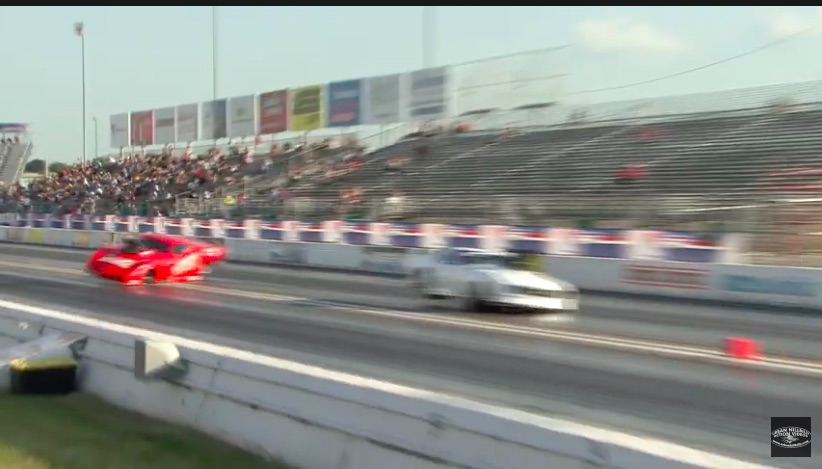 All the horsepower, not much wheelbase, and a blazing hot race track can really complicate things for competitors as Randy Merick and Jim Phillips found out last weekend a the 2021 ADRL Gateway Drags at World Wide Technology Raceway in Madison, Illinois. The track, just across the river from St Louis hosted the event and did so in furnace like conditions that tested the skill and acumen of every driver on the property. In this video you will see one of the wildest drag racing moments captured in 2021, anywhere.

Merick comes off the starting line in his red Corvette and is immediately all over the wheel as the car was not behaving. Unfortunately for him, he was unable to keep it in his lane and as he comes across the track he makes light contact with Jim Phillips who was wrestling his own car. As both machines were under power, things got hairy quick.

Phillips was able to retain more control of his car as it slid across the centerline but Merick went on the ride of a lifetime. The Corvette spins like a top, whirling around and amazingly making no contact with the concrete wall. To say that bot of these guys “got away with one” is an understatement. Phillips was the innocent victim here and we’re guessing his car had some rear quarter panel damage that needs fixing. Merick’s car is also scraped but that’s about it.

An amazing and totally unhinged moment on the strip here.

Press play below to see this crazy ride that Randy Merick and Jim Phillips took!