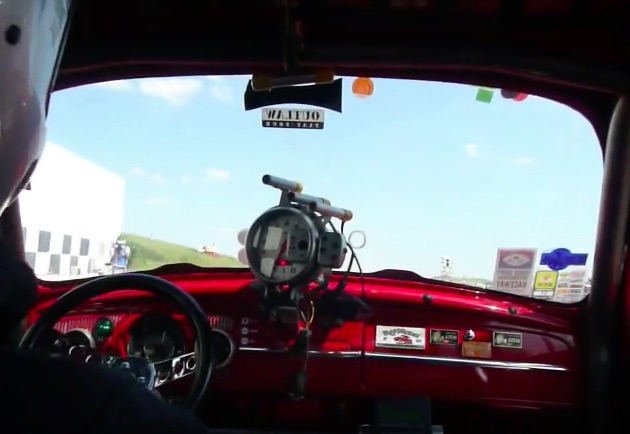 The VW Beetle is one of drag racing’s unlikely little heroes. Whether built with an angry naturally aspirated engine or force fed with nitrous, a blower, or a turbo, these little cars can be built to run like mad and this video is further proof of that. Shot back in 2009 at Shakespeare County Raceway it features a VW that sounds like it falls under the “angry naturally aspirated” grouping. By the best accuracy our stopwatch could get, this car is running either high 11s or low 12s. If the launch as cleaner is would have been in the 11s for sure. But we’re jumping ahead.

Beetles, with their rear mounted engine, light curb weight, and tough little gearboxes are oddly good for making into drag race cars. Sure they have their problems like the fact that there is so much weight out back, the fact that they their wheelbase is short and the fact that their bulbous shape isn’t exactly ideally aerodynamic but racers have been working around that stuff for decades.

We don’t have the specifics on this car but from the fact that it runs deep 12s or even high 11s (our iPhone stop watching of the run wasn’t the most accurate) with a driver ripping gears means that it is a ton of fun. Launching these cars is really tricky. As you will see here the car dead hooks and the front end comes up. This causes the revs to lug down and ultimately costs the racer some ET. That being said, the guy really rips the gears and after getting the car back into its happy place with regard to the revs he wheels it down the track nicely.

We love cars and videos like this. That little four banger sounds mean!