Ride Inside The Time Bomb Camaro As It Runs 198mph and Turns 9,300 RPM At The Ohio Mile 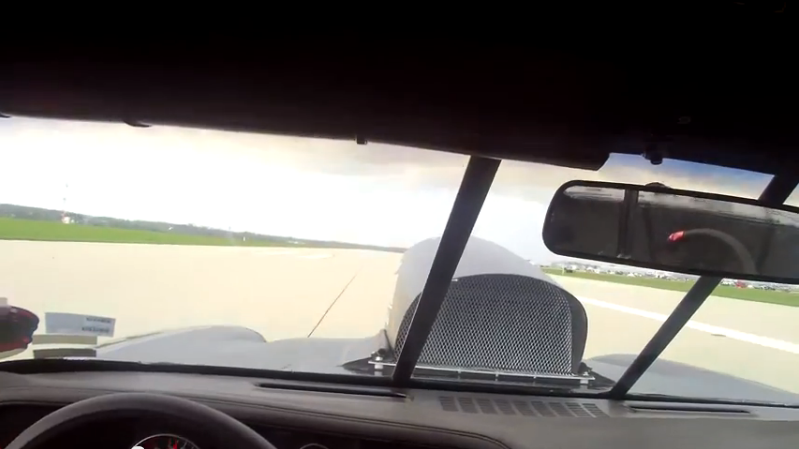 I recently started my second season as the announcer for the East Coast Timing Association and their events held in Wilmington, Ohio or what is more commonly known as “The Ohio Mile”. Truth be told, I really, really love it. The cars, trucks, motorcycles, and most importantly, the people are all fantastic. It has been an incredible education into the sport of land speed racing and each event I come away with something I didn’t know before or something that blows my mind completely. For people who think that land speed racing, especially in the one mile form is a “long bye run”, they’re wrong by a factor of about 1000. This is a brutal, maddening, rewarding, and ultimately amazing form of racing. The video below is one of the reasons why.

The car you are about to take a ride in is the “Time Bomb” Camaro of the Matyjasik Brothers. These guys have been campaigning the car for a bunch of years and they’ve been with the ECTA at Maxton and now at Wilmington, shooting to run as hard and fast as they can each and every time they pull tot he starting line. The car is neat because it has a newly added aerodynamic nose and the same tired and true “old NASCAR stuff” small block that they have been running for years on a healthy amount of spray.

The engine uses a Bowtie block, a Kings billet crank, Carillo rods, CP Pistons, and a Jesel Belt drive along with TD shaft mount rockers.The engine is topped with some old NASCAR “Buick” branded heads which really like to flow numbers at high RPM and seem to take kindly to nitrous all over the place as well. These heads are rare units and not may sets were ever made. We’re reasonably sure that these are the same heads on our buddy Scott Hall’s top dragster! The heads were never actually allowed in NASCAR racing but they can be seen on occasion at the drags.

In this video the car runs 198mph, which isn’t an impressive run for the brothers as the car has been north of 200 many times, but what is great about this video is the fact that you get to hear this engine at 9,300 RPM.

The big RPMs and the big speed give you an indication as to what it is like to hustlte a really fast car down the course for a mile straight. Take a watch below!

This 1968 Hemi Road Runner Has 1,400 Original Miles And The Seller Wants About $100 For Each Of Them New Photos From Keels and Wheels Texas - Is This The Most Diverse Car Show Ever?