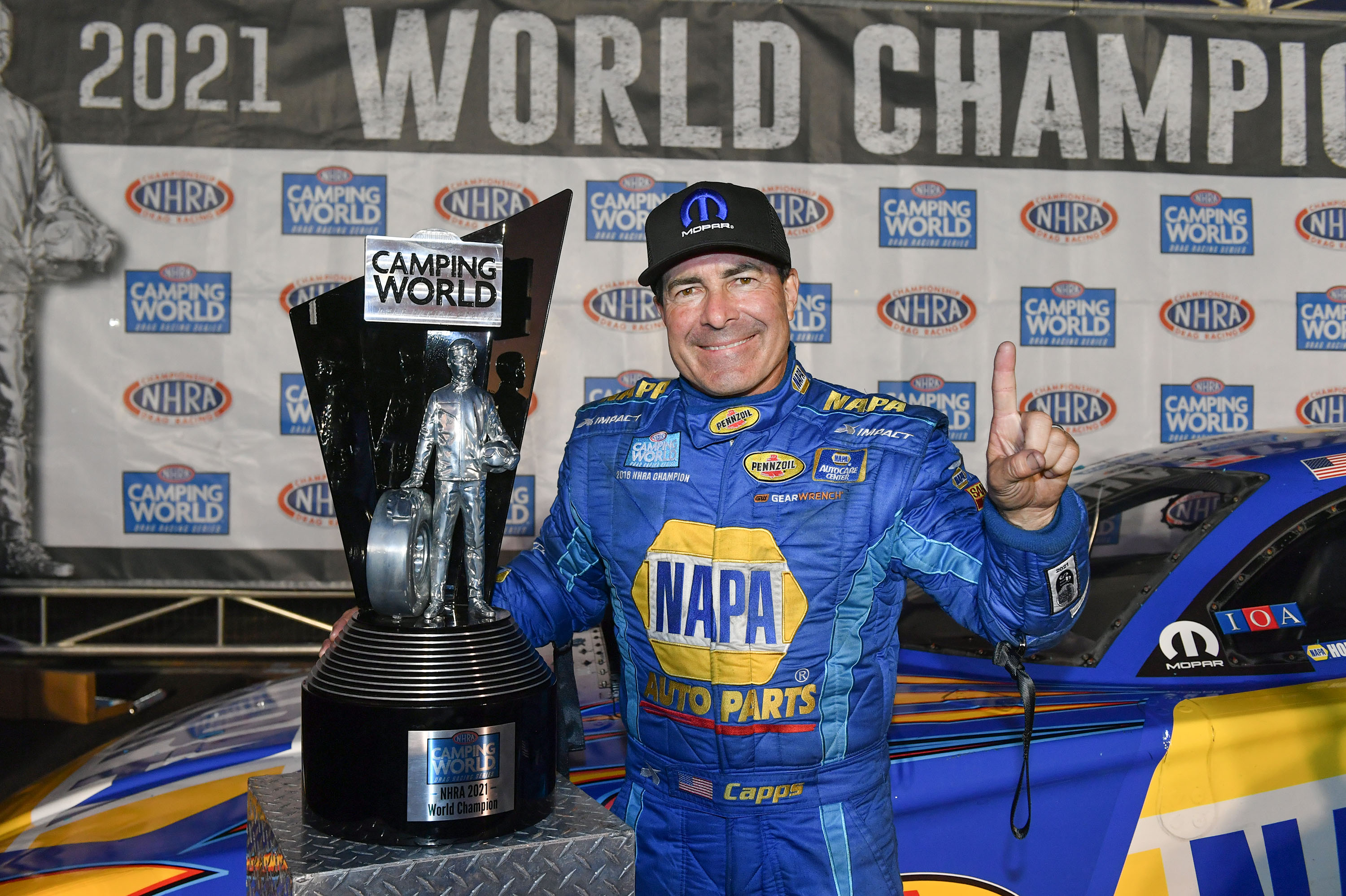 I couldn’t be happier for our dude Ron Capps who won the NHRA Camping World Funny Car Championship in the final race of the 2021 season in Pomona yesterday. At his home track, with family and friends everywhere, Ron was able to capture enough extra points in qualifying to go into Sunday with a lead in points that gave him an advantage but not enough to guarantee the championship. Teammate Matt Hagan was in the hunt as well and if he could beat Capps in the second round and then go on to win the race it was possible for him to win it all. He did his job and beat Capps in eliminations, but wasn’t able to hold on and go all the way Sunday which gave Capps the Championship Sunday afternoon in Pomona. I know Capps and the gang would have liked to have won the event, but their late season performances are what got them here and they should be really proud.

Here’s the announcement from MOPAR.

November 14, 2021, Pomona, California – Dodge Charger SRT Hellcat driver Ron Capps and Don Schumacher Racing earned the 2021 National Hot Rod Association (NHRA) Funny Car World Championship in an exciting season finale at the Auto Club Raceway at Pomona, California. It is the veteran driver’s second Funny Car title of his 27-year career, following his first championship win in 2016, and the seventh of the 19-year partnership between DSR and the Mopar and Dodge//SRT brands.

“Congratulations to Ron Capps from all of us at Mopar on this hard-earned second career Funny Car world championship,” said Mark Bosanac, Head of Mopar Service, Parts and Customer Care for FCA – North America. ”We appreciate the outstanding efforts during this championship season and thank them for proudly showcasing Mopar performance on the track.”

“What a crazy day and crazy season,” said Capps. “The fact that the Countdown came down to the Pomona Finals and was a real fight between the Dodge Charger SRT Hellcats of Cruz Pedregon, Matt Hagan and I was really neat. And to see that as a manufacturer Dodge had the competition covered, all three of us were pretty proud of that.”

Capps claimed his second NHRA World Championship after powering his NAPA AUTO PARTS Dodge Charger SRT Hellcat to two event wins, three runner-up finishes and advancing to the semifinals or better on 11 occasions. Capps and his crew collected a category-best 36 round wins and four No. 1 qualifier awards while taking the points lead five different times over the course of the 20-event season.

“The Dodge Charger SRT body has been crazy fun to drive this year,” added Capps. “We came out with a new chassis and new body and this year this body has made me a whole new driver. It’s been fun to have more vision and to be able to see better and when you are going 330 mph that’s what you need.”

Three Dodge Charger SRT Hellcat Funny Cars entered the final race day of the season with a chance to take home the championship Wally but once both No. 2 qualifier Capps and DSR teammate Hagan in the No. 7 position turned on win lights in the first round of eliminations, Pedregon was no longer in contention for the crown.

With a pending head-to-head showdown between Capps and Hagan in the quarterfinals, the 67-point difference, or the equivalent of a three rounds, between the two contenders added to drama. If Capps beat Hagan, he would immediately be crowned Funny Car Champion.

“I knew it was going to come down to the wire but we really had to worry about Matt (Hagan),” said Capps, who watched from the sidelines as the possibility that Hagan could successfully defend his Funny Car crown hinged on him taking the Direct Connection Dodge Charger SRT Hellcat to the winner’s circle. “We qualified well but still ended up racing him in the second round. It was a close race but then I had to stand behind his car and wait to see how it played out. Really proud of the job (Crew Chiefs) ‘Guido’ (Dean Antonelli) and John Medlen and the whole team has done this year.”

Hagan needed to get his Mopar machine past Alexis DeJoria in the semifinals to have a shot at retaining his crown. The three-time NHRA champ was quicker on the start but by half-track his opponent slipped past for the round win, ending Hagan’s drive and reign as Funny Car champion.

“We’ve got a great team, a great car and at the end of the day there were three Dodge Charger SRT Hellcats in the running for this championship, with (Ron) Capps, me and Cruz (Pedregon),” said Hagan. “Dodge is just doing an amazing job out there and I’m glad to be a part of it. Today didn’t go the way we wanted it to but to be in the championship hunt and be able to have a shot at it year after year is a testament to the performance equipment we have and the hard work this team has put in.”

With a category-best four wins this season, Hagan and his Mopar Dodge//SRT team’s runner-up finish in the championship was their 11th time closing out a season with a Top-10 result.

The third contender in the Funny Car title chase heading into the final race day was  Pedregon, who arrived at Auto Club Raceway fresh off his victory at the Dodge//SRT Nationals in Las Vegas and put his Snap-On Tools Dodge Charger SRT Hellcat No. 6 on the ladder with consistent qualifying runs. With a 91-point deficit prior to the opening round, any championship hopes for the Cruz Pedregon Racing team were contingent on Capps exiting in the first round.

While that didn’t happen, Pedregon lined up for the first round match against No. 11 seed Tim Wilkerson feeling positive about the consistency and progress his team made this season. Pedregon’s HEMI-powered machine had a good launch and was on the move when tire smoke early in the run brought to a close his team’s best season performance since 2013. The team finishes fourth in the points standings with two wins, a pair of runner-up finishes and a No. 1 qualifier award. Their Dodge Charger SRT Hellcat turned on win lights 30 times in eliminations this season, only the third time in 20 years that Pedregon has won 30 or more rounds.

In Top Fuel action, DSR pilot Leah Pruett’s solid qualifying performance put the Direct Connection Mopar Dodge//SRT dragster No. 3 on the eliminations ladder with a 3.706-second pass at 327.59 mph in the final session. That afforded the HEMI-powered machine lane choice over No. 14 seed Cameron Ferre for the opening round of the final national event of the season.

After a quick start, Pruett was chasing down her opponent when a loss of traction prior to half-track hampered her efforts and brought her race day to an early end. She closes out her season seventh in the Top Fuel standings, her sixth consecutive top-10 finish since joining Don Schumacher Racing in 2016, with an event title at the Pomona Winternationals and runner-up finish at Sonoma.

The NHRA Camping World Drag Racing Series will return to the dragstrip in February with a 22-event season schedule that will again include five national events with Mopar Express Lane and Dodge//SRT title sponsorship.

“Congratulations to Ron Capps. He’s a true legend of the sport. He’s been out here probably more than twice as long as I’ve been racing. Those guys just outworked and outperformed us this year. At the end of the day, we get to come back out here and fight them again next year. At the end of the day and a long year, I just want to say I’m proud of (Crew Chief) Dickie Venables and my entire crew. We battled back after a couple of bad race days at Bristol and (Las) Vegas. I’m happy for Ron and sad for us. The sun will rise tomorrow and it’s time for us to work hard this off season and come back out here and do it again in a few months here at Pomona. Great job to Capps and the NAPA team.”

“I can’t even believe that just happened. You don’t want to go up there and wish someone bad luck. That entire Hagan team with (crew chief) Dickie Venables is incredible. I expected them to go win the race. I don’t know what to say. I’m just shaking right now. I stood and watched from that same Pomona Raceway grandstand as a kid and watched guys like (Joe) Amato and Gary (Ormsby) line up in the final round here years ago and to be doing this myself and to now have a second championship, I can’t say enough.”

“I hate it for the team more than anything to end such a great year with tire smoke but Tim (Wilkerson) was a tough opponent. We had a lot at stake today but we accomplished a lot this year, we were in the championship conversation until the end with three Hellcat drivers. I respect and admire both those drivers. Really proud that we had 30 round wins. That’s a stat that shows how important consistency is. I’m excited about keeping that consistency through next year with this same group of people. We’ll look at what we can improve on but I look at this season as a huge success. I’m not a fan of the points-and-half format for the last race because that doesn’t reward what we have done over a stretch of time. Where we ended up is not indicative of the effort we put in and what our Dodge Charger SRT Hellcat accomplished this year. We were a solid third place car. It was a good season for us. We had good support and for three Mopar Dodge Hellcats to be there at the finish is indicative of how good these cars are.”

“The level of confidence heading into the final race here at Pomona was extremely high – higher than it’s been in some time. The attitudes were positive. The takeaway from the first round loss is a straight mechanical malfunction. The clutch did not move. It wasn’t a tuning or personnel issue. Therefore, we had no power. It mixed up cylinders immediately. A couple pedal jobs and a weird sensation in the car when you’re not going anywhere, but also not smoking the tires. Sometimes it’s just necessary for a very hard reset. This entire team has a heart of gold. We represent the ‘never lift’ campaign for Dodge and we are a testament for that and sometimes when you never lift, a part does. We’re looking forward to next season. We couldn’t be more thankful to DSR, Dodge, Mopar, Pennzoil, all of our great partners at Don Schumacher Racing, and everyone at DSR for some amazing seasons.” 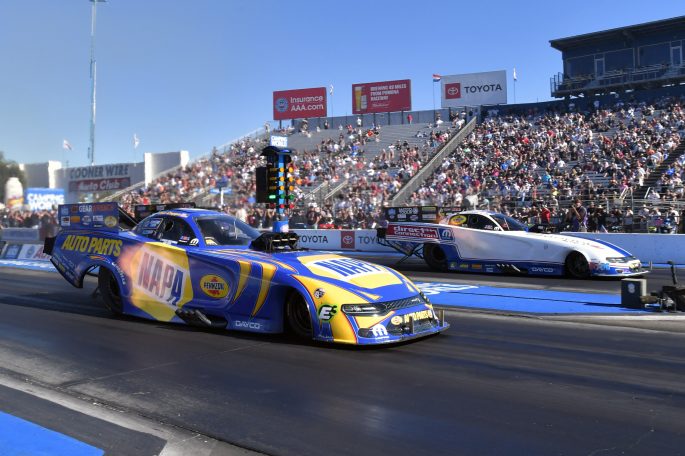 Check Out The Top 10 Pickups From Barrett-Jackson In Las Vegas Gasser Video! The Southeast Gasser Association Finals From Shady Side Dragway