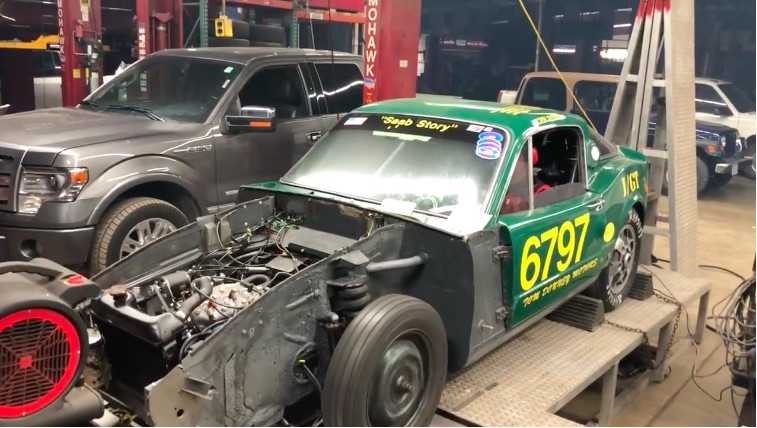 The Saab Sonnett was a minuscule sports car offered by the Swedish company in three different generations. Small, light, front wheel drive, and fun to operate, they were not sold in huge numbers here but those that drove them seemed to like them. Positive media reviews in period sports car magazines prove out that these were fairly cheap, fairly fun sports car if you drove them like you hated them. This particular unit is Tom Donney’s Saab Story Bonneville land speed racing car. Yes, you are looking at a Saab Sonnett Bonneville record holder! Running in the I/GT category the car has gone 127mph and running the J/GT category the car has gone 123. How? Awesomely, that’s how.

The car is powered by the same style of engine that it had from the factory, a three cylinder, two stroke inliner that measured out to 841cc when stock. We are guessing that this one has been bored and all you really need to know is that as a J motor at Bonneville can be a MAX of 45ci. From Saab originally this little engine was making 59hp. You will see that Donney’s screaming version is now making more than 113 to the wheels. That is an immense increase on a percentage basis and boy do those 8,000 RPM sound awesome!

Donney’s car is the perfect example of the majority of the machines that race on the salt. They were labors of love, created and maintained by owners who are challenging their own skills and ability. This is not some million dollar car. Donney has years of time, blood, sweat, and work into the car but it is not something that he’s leveraged his life to compete in.

Some of you may scoff at the speeds involved here but we think they are amazing. And taking a 59hp factory engine and doubling its output…to the tires?! Yeah, THAT is BangShifty.

Press play to see this little Saab scream to the heavens at 8,000 RPM