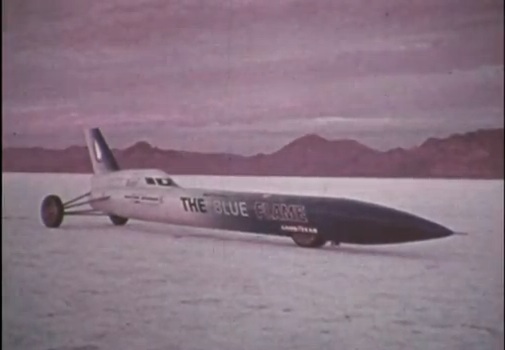 Before the British Thrust SSC took the World Land Speed Record in 1997, it was held by an Earth-bound rocket known as, “The Blue Flame”. The car was built by Reaction Dynamics, the company of Pete Farnsworth, Ray Dausman, and Dick Keller who hailed from Wisconsin and it was driven by Gary Gabelich, a man whose accomplishments and feats make guys like Travis Pastrana look like church ladies. Over the span of a little more than a month in 1970, the entire Blue Flame crew toiled on the famed salt of Bonneville before resetting the record at a then astounding 622mph in the flying mile and 630mph in the flying Kilometer.

This 13-minute documentary film follows that month on the salt. Like the car, it was sponsored by the American Gas Association. The AGA was using the publicity generated by the car as a means to promote the use of natural gas. The LNG was injected into the combustion chamber of the hydrogen peroxide rocket engine that powered the car. The effect of this was to increase the power of the rocket and the men involve credit the extra thrust created for helping them to set the record.

Our favorite parts of this video are those that show Gabelich on camera. He was an awesome racer in his day at the drags, on motorcycles, drag boats and whatever else he climbed on or in. He did all kinds of kooky stuff other than racing, including working for a company called North American Aviation, which we believe was a division of Rockwell at the time. Essentially, Gabelich was a test subject for lots of the early Apollo space equipment.  He did stuff like sky diving from balloons 30,000ft in the air. Seriously. This LSR stuff was a walk in the park for the then 30-year old driver.

A few years ago at Bonneville we saw multiple cars at the pinnacle of technology go 400+ mph. The Blue Flame makes all of them look cute and slow in comparison. The next year will be interesting because of the efforts of the British Bloodhound effort that will be attempting to go 1,000mph on land. Land speed racing rules!

The Blue Flame and Gary Gabelich thunder to the land speed record!

Demo Derby In Car Video: Watch A Cadillac Take Four Minutes Of Pounding Before It Spits The Bit Cool Old Video: A Turbine Powered 1962 Dodge Drives Across the Country