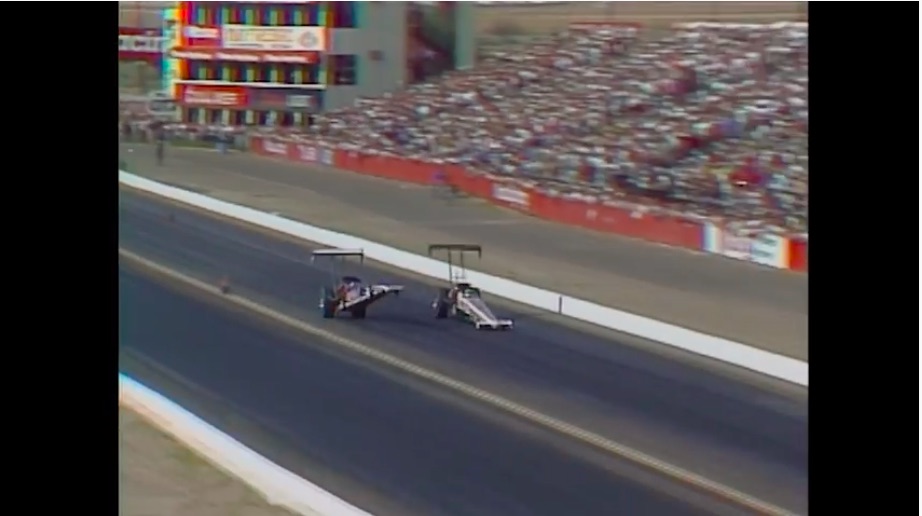 One of the most fun projects I’ve been working on so far in 2020 are these short videos that we’re calling, the “Nitro Time Machine” series. Basically they are all moments I have picked out in NHRA history and then the talented editing staff at the NHRA office digs up the vintage footage and makes the whole package look awesome. The vintage feel of the graphics and music are all great elements of this whole package and since we made dozens of them when I was in California before the NHRA Winternationals, you’ll be seeing plenty of these nuggets through the course of the 2020 season.

In this installment of the series, we go to the third round of top fuel eliminations where Shirley Muldowney and Gary Ormsby are getting ready to square off. Ormsby, the 1989 champion was off to a slow start in 1990 because of the fact that the NHRA had mandated a 3.20 gear ratio for top fuel cars. His team had been running a deeper gear the year before and this change caused them to make big changes to their tune-up.

For Shirley, the start of her Otter Pops deal was the big news. That and the fact she was trying to go back to back in Arizona having won the 1989 race in her comeback to the NHRA series.

This video captures two of the all-time greats both pushing themselves and their machines as hard as they’ll go and one of them headed straight over the line of control!

Plumbed And Ready: Building The Hydraulic System For The Screw Tank Project Money No Object: A Revisit On The Dirt-Tracker AMC With This 1968 AMX?