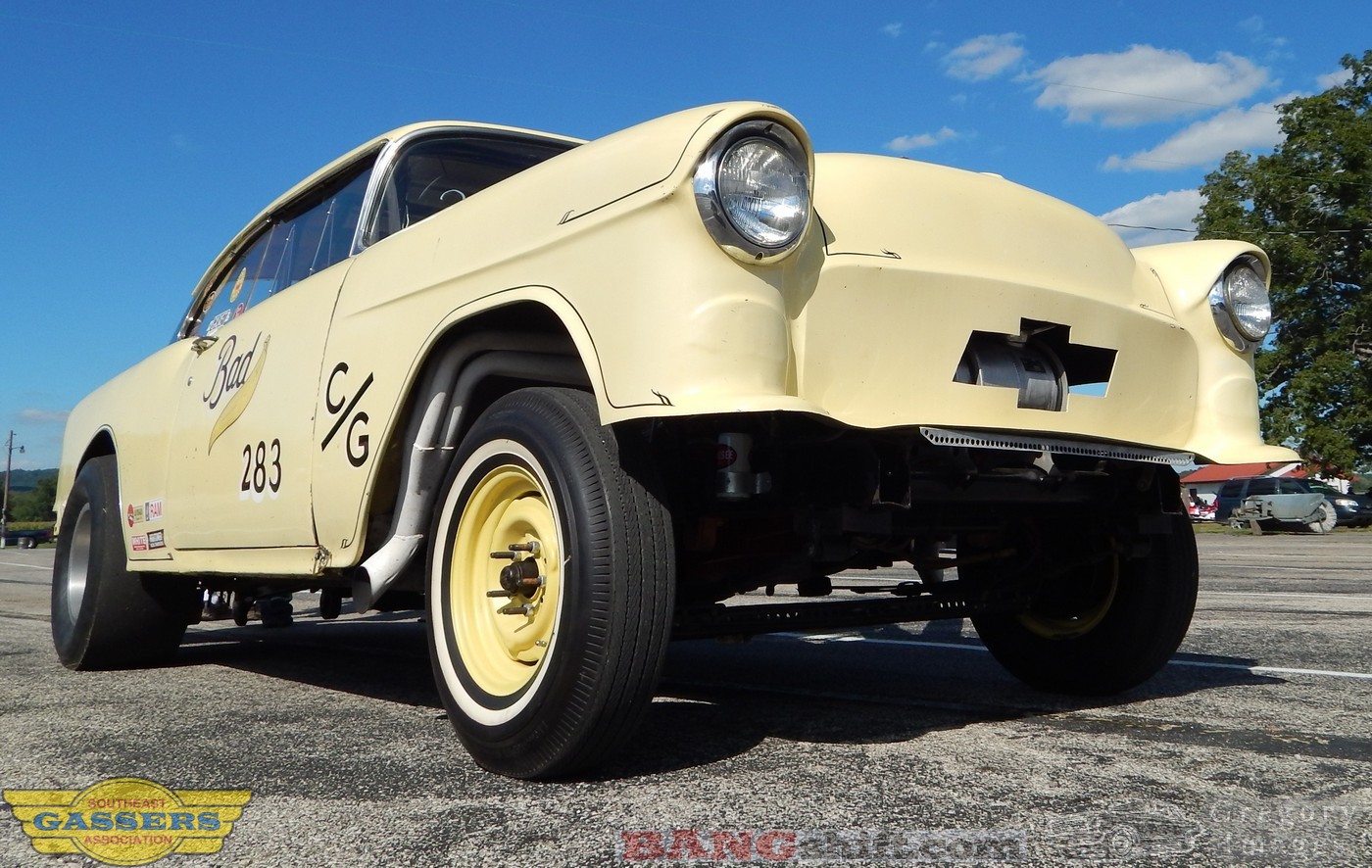 (Words and photos by Doug Gregory) –  More badness from the Southeast Gassers at Mountain Park Dragway in Clay City, KY.  The track first opened in 1963 and has been going strong ever since.  Located off the aptly named ‘Bert Combs Mountain Parkway’ the track has hosted lots of great events over the years and we’ve been fortunate enough to have been going there since the late 90s.  Seems appropriate for Quain to bring his band of racers up to Kentucky and soak up some of the history up here.  Plenty of fans of Nostalgia racing here in the Bluegrass state.  There’s Thornhill Dragway which is arguably the oldest continually-operating track in the country.  We’ve also got US-60 which has been a hotbed of nostalgia racing for years.  Of course Beech Bend has been hosting the National Hot Rod Reunion for years now, has recently added the Tri-5 Nationals, and the Goodguys event was just a few weeks ago.  At any of these tracks and others in the Commonwealth you’ll see plenty of older body styles around the pits.  I’ve only been to a couple events here that didn’t have a wide selection of classic, early, and muscle car-based racers.  SEG is a good fit.  This gallery brings you six more of the Southeast Gasser competitors and some tidbits of information about them.

C/Gas     Bad Banana ’55 Chevy campaigned by Rusty Sampsel from Lapeer, MI.  This was his dad’s racecar back in the day so it is the real deal.   It’s power comes from a 427ci SBC that is sent back to a Jerico and ends up twisting the pinion on a Dana 60.l

C/Gas     Fowl Can ’63 Ford Falcon of J.W. Barber from Greenup, KY.  As a dedicated Ford man this thing is packed full of vintage speed parts and all the bones are FoMoCo.

A/Gas     White Trash is Donovan Stott’s ’48 Anglia powered by a 327ci SBC, backed by a Jerico, and turning the slicks with a 9” Ford.  This setup provides plenty of thrills and Donovan’s driving is top-notch.

C/Gas     Hitman Studebaker is driven by Tim Timmerman.  I didn’t find much out about it.  It’s a sweet-looking and interesting ride for sure.  Hope to see it again and learn more.

A/Gas     Night Stalker is owned and driven by Greg Porter from south Carolina.  As to specifics on the car, I checked my notes and I don’t seem to have much of anything.  I do know it has a screaming small-block Chevy that can propel this monster to the 8s.  It does massive 2nd-gear wheelies and it won the Geezer Gassers class at the 2016 California Hot Rod Reunion.  I’m guessing he didn’t try to cackle his car when not authorized or else he’d been booted.

How Much Would You Pay for a Big-Dollar Auction Starting Point Like This '58 VW Bus? SEMA 2016: Our First Look At The "Project Underdog" 1972 Ford Maverick!

One thought on “Southeast Gassers Action Photos: These Cars Are Spectacular”