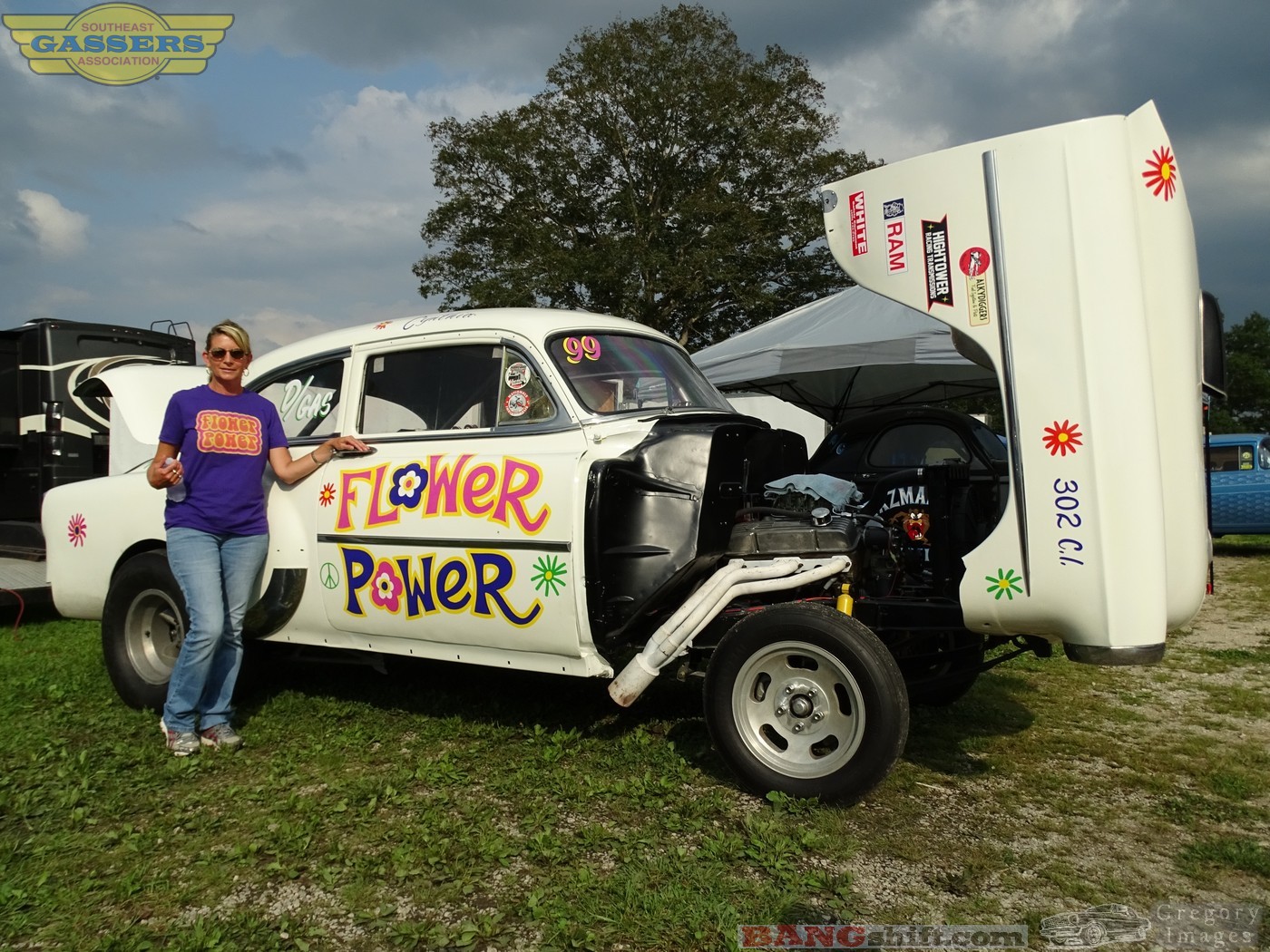 (Words and photos by Doug Gregory) – D/Gas is now a very popular class in SEGA and word is there are several more cars planning to join up in 2018.  This class requires 10lbs per cubic inch with a minimum of 3,000lbs.  Run quicker than 7.249 and you win a mandatory trip to the scales.  This is not the ‘slow class’.  These are 11-second cars in the quarter-mile which is still a blast to watch and very competitive.  Wheels up launches and high-winding, small-displacement engines are a common recipe.  One of the cool things I’ve caught on to about SEGA is that with their rules pretty much any car can run in any class if they meet the weight.  Some have swapped classes through the season and some are planning to make a move.

Mountain Park Dragway has been under the management of Scotty Richardson for over a year now and the transformation has been well-received by fans and racers.  The upgraded lighting, drainage, scoreboards, painting, and more have really improved the events.  Scotty is ever-present during the events and is constantly thanking fans and competitors for coming.  Even with the threat of rain attendance was good for this 2nd-annual SEGA event MPD.

D/Gas put on a heck of a show with plenty of wheelies, hard shifts, and tight races.  The final round was won by a frequent visitor to victory lane in 2017 – Todd Oden in his black Double XX ’58 DelRay.  Most wouldn’t think this massive, 283-powered beast to move out like it does, but dang it flat gets with the program.  No one made it easy for him though and the win is legit.  Todd also ended up winning the year-long inaugural points Championship for SEGA D/Gas.   Bravo.

Here I present what information I have gathered on the class cars competing at this event.

Cynthia Phillips is not new to the SEGA series as the constant companion of the ringleader – Quain Stott.  She is new to the competition in her Flower Power white ’50 Chevy.  It’s powered by a 308ci SBC (it was a real deal DZ302).  Shifts are done in a Hightower-modified top-loader moving power back to 6.00 gears in a Ford 9”.  It’s paint scheme always gets the fans’ attention as do it’s big wheelies with no burnout using Quain’s old slicks.

I know virtually nothing about the red Mr. Gasket Anglia panel other than it was wheeled by Kelvin Cannon and does amazing wheelies and dry hops.  This thing is quick and violent on the shifts, but goes straight down through broadway.  This thing sits over at the camp with the Sonee Hall cars so we know it’s stout.

Trouble Maker is the bright red ’49 Studebaker truck ran by Rick Cathcart.  It runs a 345 Mopar backed by a Tex 101 trans sending grunt back to a nine-inch sporting 5.14 gears.  This thing has all of its original sheet metal and is still street driven.  Too cool.

Jack McDaniel’s black and dark red Chevy coupe, Mighty Lady, is small-block powered.  I did a poor job of gathering information at the track and dragging information out of folks afterward has been spotty at best.

Jumpin’ Jack Flash is the black ’55 Chevy of Richard Carter.  With a big-block Chevy for power it does jump right off the starting line.  I think the big white steelies on back are perfect for it.

Anthony Zompetta handles the reins of the Orange ’51 Henry J.  This is another real-deal car that was raced in A/Gas back in the 60s.  These days it gets motorvation from a 377ci SBC with a M22 shifting power back to one of those humongous Oldsmobile diffs housing 5.70 gears.

The Young Blood ’63 Fairlane is wheeled by young gun Josh Pruitt.  This slick-looking racer is fronted with a 308 SBF sending horses through a Hightower top-loader with some steep 5.40 gears stuff in the Ford nine-inch rear.

John Gilligan’s ’57 hails from Ohio and is called ‘Penny Pincher’.  The patchwork hotrod looks every bit the part of a bucks-down operation back in the day.  The 331 small-block is backed up to a Jericho putting the twist on a Ford 9” housing a 5.13 ratio.  John says he is planning to run a 355 in 2018.  Watch out D/Gas…!!!

The H-Bomb Henry J came all the way from Canada to wow the crowds.  Brian Higginbottom herds this blue bomb and it loves up to its name with some explosive performance.  I managed to be out of position to capture its finer moments.

Lastly we have Todd Oden’s ’58 which I described earlier.

D/Gas is a welcome addition to the SEGA classes and we hear there are more classes being added to the fray here in 2018.  Look them up and see where the nearest even will take place and get there.  I highly recommend it.