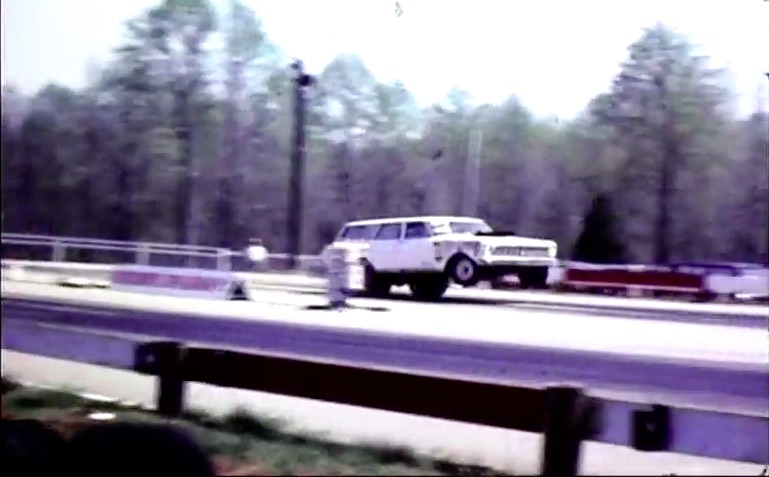 A couple years back Roxboro Dragway, now Roxboro Motorsports Park was in the news as the facility was auctioned off to the highest bidder. Having sat dormant for a little while, we were nervous that the strip would head the way so many underused tracks do and fade off into history. Thankfully that’s not the case and the track is once again running a full program and by all accounts is doing a fine job at it. We’re going to Roxboro in this video that was made around 1977 to enjoy what looks to be an awesome match racing event complete with pro stock, fuel funny cars, alky funny cars, and killer machines like Gene Fulton’s famous “White Wagon” IHRA Modified hauler.

Roxboro opened up in 1959 and was a dirt facility, not receiving pavement for a few years. It was run as a quarter mile track for many years, including the period when this video was made. It is now and has been for a long time, operated as an eighth mile facility.

There are some awesome moments in this one from the wheelies coming out of Fulton’s wagon to a Corvette that really hangs them high. Watching the funny cars run is cool and there’s a scene shot from behind the starting line where we see a crew guy doing something that is timeless in the sport.The guy is punching at the air and willing the car down the track until he sees the win light and reacts appropriately. The big difference between then and now is that the dude had a bottle of bleach in his hand from the burnout!

The little track seems to have packed them in one this day. We’re glad for places like Roxboro. Drag racing needs every facility the sport can muster and places like Roxboro that have trooped on through the decades make us smile and appreciate this sport for the awesome spectacle that it is.

In The Realm Of Publicity Stunts, Floating A Farm Tractor On Your Ag Tires Is Pretty Darned Good The Perfect Snow Storm Survival Rig! This Lifted Squarebody Suburban Is A Snow Blasting Machine