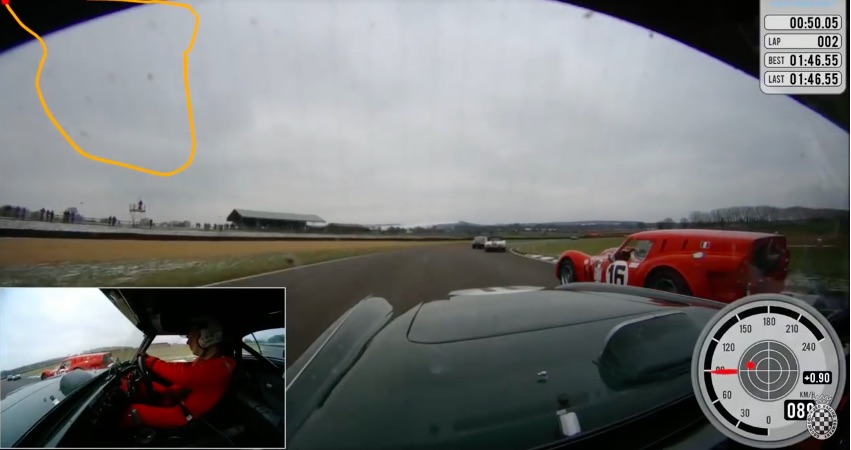 Donald Healey was a brilliant guy who built some awesome cars in his day. In many ways, his masterwork was the Austin Healey 3000 Mk1. Powered by a “Big Six” 3.0L inliner, it was a budget alternative to the Jags and other big dollar sporty cars of its day. It was also a capable performer and in terms of “bang for the buck” there was not much that could touch it back in the day. Healey never had the big racing budgets of the other companies so they were not exactly fighting on equal ground when the cars were new. That being said, 50 years on, the cars are shockingly competitive against the larger buck machines in the world of vintage racing.

You’ll see some of the tightest wheel to wheel racing you have ever laid your eyes on here. The torque and grunt power of the Austin engine is on full display as the driver works his way through the field. You’ll see eventually that the 3.8L powered Jags start to make some room once traffic spreads out, and they should as the OHC Jag engine makes more power than the truck like Austin-Healey mill does. Down low though? Down low the “big six” does what it was designed to do. In many ways the Healey was a British muscle car insomuch as it had a really large engine in it for its weight and overall size.

We love these vintage racing videos. Watch the drivers and their steering inputs. Running on the tiny, narrow tires, these guys just about wear through their woodgrain steering wheels by the time they are done making laps.

Not One, But Two BANGshifters Sent Us This Online Find To Share! Check Out This 440 Powered Suzuki Samurai Gap Jumper: Watch The Spark From An MSD ProMag 44 Clear 2-inches Of Distance And Even Beat The Wind