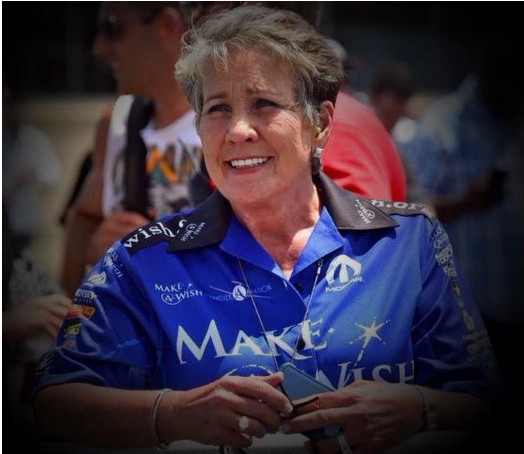 (Photo credit: Don Schumacher Racing) – You’ll read a lot about Terry Chandler in the coming days and it is all true. She has had a great and positive impact on a great many people in the world. Not just the world of drag racing but the world in general. Her work in the sport of drag racing has greatly benefitted wounded veterans with her support of the Infinite Hero foundation and the nitro funny car that Jack Beckman drives. Raising hundreds of thousands of dollars per year for research is one thing but the titanic impact she has had on families with ill children through the Make A Wish Foundation is literally immeasurable.

Likely everyone in the world knows this but it bears repeating that neither Make A Wish nor Infinite Hero paid for those cars. Terry Chandler paid the bills on the cars to promote the charities displayed on them. Jack Beckman, a veteran is a perfect guy for the Infinite Hero car and Tommy Johnson Jr. a great human being on his own has really showed his stripes as the driver of the Make A Wish car by not only meeting the various families and kids that come to the races on a weekly basis but going the extra mile to visit kids outside of the track and truly make some dreams come true.

For several seasons I’d see Terry on the starting line cheering on her cars, the cars being run by her family members, and she’d do lots more than watch. She would hang on their performance. She was a true fan of the sport, a true fan of the culture of drag racing, and a rare example of a person who was truly dedicated to make the funds she had gained in her life work well beyond her own needs.

Terry will be missed by all.

BROWNSBURG, Ind. (July 4, 2017) – Terry Chandler’s commitment to helping others has left an indelible mark on the National Hot Rod Association and Don Schumacher Racing, and her memorable presence at racetracks and with her Make-A-Wish families and the Infinite Hero Foundation will continue to live on in the hearts of thousands.
Sadly, Terry lost her valiant fight with brain cancer on Tuesday afternoon. She was 65 when she died in Florida with family and loved ones at her side.
“Terry is a great human being who devoted the past few years to helping the Make-A-Wish and Infinite Hero foundations with her love and kindness by funding two of our Funny Car teams,” said Don Schumacher, DSR owner and close friend.
“Terry is such a beautiful person. She was so much more than a friend and partner. She is family. We will always see that wonderful smile of hers at the starting line.”
The native of New Mexico missed the NHRA Mello Yello Series event at Las Vegas in early April and a few days later underwent major surgery to partially remove one of three tumors in the front lobe of her brain. It was determined by an MRI that she was suffering from Glioblastoma cancer.
She was immersed in the fight of her life and battled valiantly to the end.
Chandler was presented with the NHRA Blaine Johnson Award in 2015 for her dedication to helping others.
“I love to race,” she told Autoweek magazine in a 2015 article. “And bless my heart, I love to win. These gol-darned cars, I just love ’em.”
Earlier that year, she was described as being “the most influential woman in drag racing” by the Inland Valley (Calif.) Newspapers.
“I never dreamed that I would be blessed in a way that would allow me to help others,” she told the Southern California newspaper.
“Helping people is one of the most important things in the world to me – my daddy, John R. Gray, was an extremely giving man, and I learned from him how important it was to bless the lives of others. That is why this means so much to me. I feel very fortunate to be in this position.”
Terry became a fixture at

NHRA national events when her brother, Johnny Gray, drove a Funny Car for DSR. In 2013, Terry and Johnny decided to fund the car he drove as a tribute to their late father John R. Gray, a self-made man who rose to legendary status in the New Mexico and north Texas oil industry.

Upon Johnny’s retirement from driving at the end of that season, Terry began funding the team and added driver Tommy Johnson Jr. Terry and her husband, Doug, own and operate Chandler Aviation at the Cavern City Air Terminal in Carlsbad, N.M. Instead of flying the colors of Chandler Aviation on Johnson’s Dodge Charger, she chose to use the racecar as a platform to promote awareness for a great cause. The car was painted and the transporters were wrapped with a striking Make-A-Wish design.
She wanted her racecar to be a “giving car.”
Chandler and DSR host “Wish Kids” and their families to the VIP hospitality pavilion next to the race team’s pit area on Saturdays at each of the 24 Mello Yello events held in 21 markets across the country. The Make-A-Wish crew has the opportunity to engage with the children, giving them a tour of the pit area and racecar.
A few months of committing to fund the Make-A-Wish team, another DSR team appeared close to dissolving when the woman with the infectious smile stepped in to fund the one driven by Jack Beckman and donated its branding to the Infinite Hero Foundation, a non-profit organization that combats the most difficult front line issues by providing grants to help the physical and psychological challenges faced by returning military veterans.
More than $300,000 has been raised by the sale of “challenge coins” Beckman carries on each run for a $100 donation to Infinite Hero and nearly $500,000 has been raised for the organization through Terry’s efforts.
For the past two years, she funded the Riley Kids Funny Car to benefit Riley Hospital for Children in Indiana during the prestigious U.S. Nationals near Indianapolis. She contributed additionally during DSR’s annual Open House that weekend that also raised funds for Riley Kids, often bidding on items she would donate back to the effort.
She funded countless Make-A-Wish dreams to provide monumental memories.
She always made it clear to the “Wish Kids” that the racecar was their car. She would proclaim, “This is YOUR racecar.”
And it will continue to be this weekend when her Make-A-Wish and Infinite Hero teams race for her during the NHRA Route 66 Nationals near Chicago.
“Terry is just an incredible lady, and we’ll never know how many lives she impacted,” Don added. “We’ll miss her every day, but we’ll never forget her smile and he big heart.”
A private funeral service will be held with a public memorial tentatively set for over Labor Day Weekend near Indianapolis during the NHRA U.S. Nationals.
Sideshow: Check Out This Twin-Engine Chevrolet Cavalier! Two Anemic V6s Have To Be Better Than One, Right? Random Car Review: 1969 Pontiac-Farago CF 428 - Pontiac Grand Prix Meets Italian Coachbuilding!