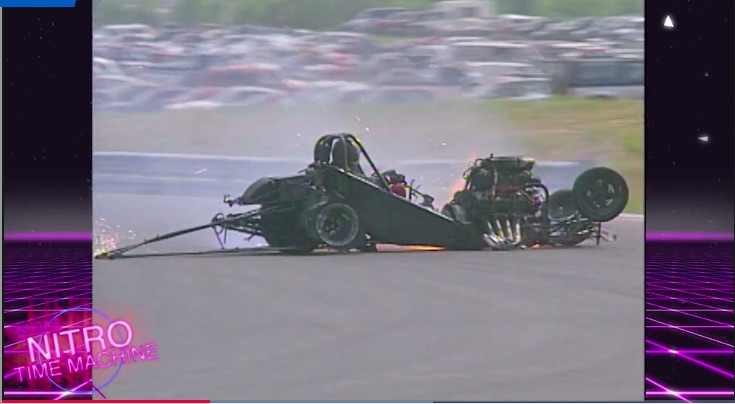 Having the to poke around the extensive NHRA digital film archive is one of the best parts of my job. I get to cruise around in there and pull vintage video, some of which the public has never seen before. This footage you are about to watch comes from the infamous 1992 Memphis race where John Force “Saw Elvis at 1,000ft”. You’ll see him in a pitched battle with Al Hoffman when his car explodes into flames, crashes violently, and then slides with great speed, into the sand trap before rolling over.

What makes this video so good is that it’s part of the “line cut” which means that lots it never made the air. Initially Steve Evans is confused as to who is in the car that’s crashing and all of that gets fixed. You will see Force getting tended to by the medial folks, you will hear him talk to the cameras once he is on his feet, and you’ll see a second interview once they had him in the ambulance.

One of the reasons you never saw this stuff on TV was because of a couple moments of static that can be seen here. They are small and I left them in for effect. Those static moments would have negated the film’s use on the show. We’re guessing they were transmitting pretty car to get this footage to the TV truck and that’s what caused it.

Listen to Hoffman and Force break each others’ chops once Force’s health is established. Awesome stuff. 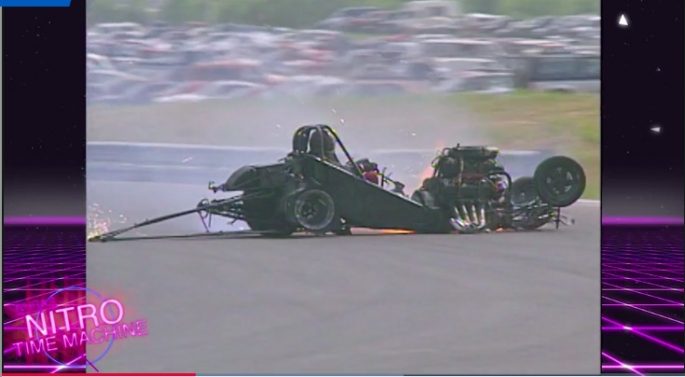 Ridetech Has New Apparel To Wear and New Components To Drive - Check 'Em All Out Here Simple, Awesome, and Fun: Watch These Hot Rods Hammer Down An Old Kansas Air Strip