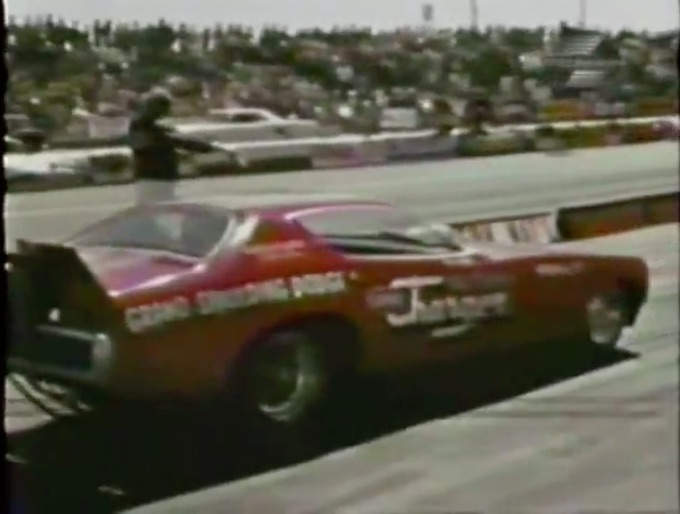 Sometimes you just have to try something to see if it works, right? In 1974 the IHRA did just that, renting the pit road at the expansive Charlotte Motor Speedway and turning it into a national event drag strip. They did it once. This video, taken from a “Car and Track” broadcast presumably made in 1974 shows highlights of the oddball, one off, eighth mile race that was not that well attended and was not all that well liked by competitors. The surface was touch and go and the whole “shut down as banked corner” thing was freaky to many of the faster racers. Dave Anderson got killed in his rocket car at this race when it got loose and basically ended up in the pits. Bad, bad deal.

That being said, this video brings us front and center at the 1974 IHRA Southern Nationals from pit road at Charlotte Motor Speedway. The race brought out the biggest names of the day as national event racing opportunities were limited at this time. From Al Segrini to Larry Fullerton and a host of others in funny car, Marvin Schwartz, Pat Dakin, and others in top fuel, and finally guys like Roy Hill and Wayne Gapp in pro stock, the fields were jammed with talent.

You’ll see how it all shakes out in the film below but the winners were Wayne Gapp, Kenny Safford, and Dale Funk. The coolest stat of all? Dale Funk beat Pat Dakin in the final. Pat Dakin continues to run top fuel at zMax Dragway, more than 40 years after he was competing “across the street”!

Press play below to watch the 1974 IHRA Southern Nationals at Charlotte!