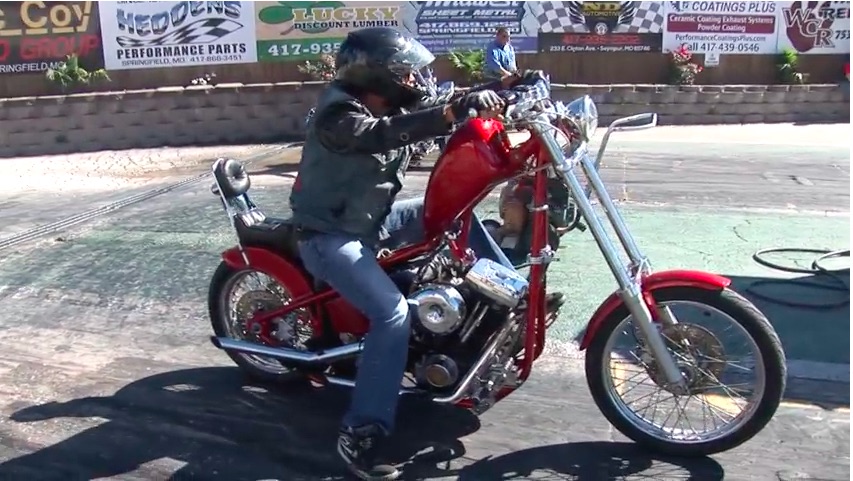 Oh, sweet baby BangShift! This is one of the coolest videos that we have seen in forever and the thing is centered around a motorcycle?! Yeah, we’re not kidding, this is beyond cool and here’s why.

The bike has a custom made frame from the owner, it is powered by a worked up 113ci V-twin engine and here’s where it really gets good. This thing has a foot clutch and a jockey hand shifter! Not only that, the dude that rides it can drive the daylights out of the thing and you are going to see him ripping 11-second passes like nobody’s business. One hand on the bars and the other on the shifter.

We never knew why hand shifters on motorcycles were called “Jockey Shift” style bikes before but when you watch this guy operate his hot rod you’ll notice that he does look like a horse jockey hunched over and giving the flanks of the animal some “encouragement” via whip. In this case it is just the guy ripping the handle from gear to gear but the look is the same.

This is the hardest core version of a hand shifted bike we have seen for sure. We have showed you videos of them rolling up and down the road but being drag raced and drag raced well?! There cannot be more than a handful of guys in the country who could do this as well as the man featured in the video. The layout itself is exceedingly rare and you have to want to add it to your bike for starters. Add in the racing element and you are in some rare air for sure.

Finnegan's Caddy Project Is Out Of Control! Floors and Chassis In The Trash! BangShift Book Corner: The Cars Of Trans-Am Racing 1966-1972 by David Tom