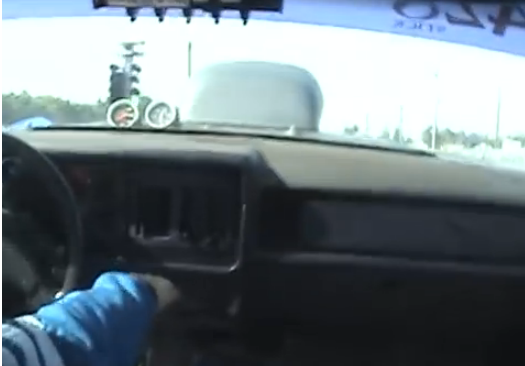 This kick ass in-car video of a 1986 Mustang drag car is just as appealing for the audio as it is for the visual aspects. Sure, you’ll see the car launch and the driver expertly run through the gears, but man, the former 302 turned 347 stroker just absolutely wails as the car sprints down the historic eighth mile at Farmington. We’ve got no idea what the rear end has in it for gears, but judging by how quickly the driver rips the handle through the cogs, they’re Everest steep.

People run hot and cold on the 347 stroker combo. It really stretches the limits of the 302 block and some guys really hate the extreme rod angle the stroker crank creates in a stock block but hey, if we go back to one of the bedrock expressions in hot rodding, “there’s no replacement for displacement” and the fact that Ford Racing has that sweet new Boss block and guys are taking them to well over 400ci, the little 347 doesn’t seem all that nutty anymore.

This car has a four speed in it and the guy at the helm seems to have done this whole drag racing thing before. We dig the annotations in the video kind of telling the viewer what’s happening, what RPM he’ll be launching at, and all the rest. The car pulls a nice wheelie when he side steps the clutch to launch the car and then he’s a shifting machine after that. The car sounds REALLY good and there’s really nothing quite like listening to a stick car jump up on the two-step at the starting line because you KNOW violence is sure to follow.

CRANK THE SPEAKERS AND PRESS PLAY!