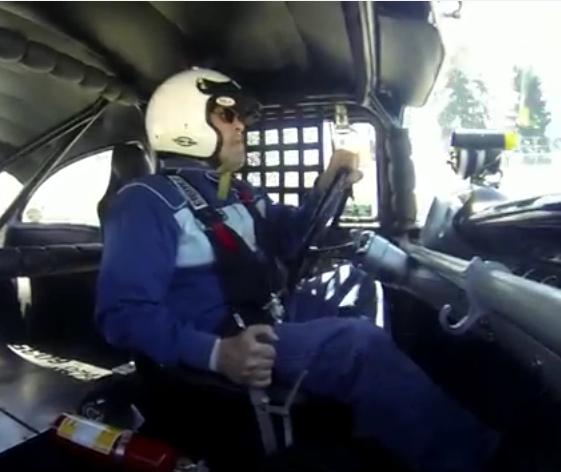 Robert Fedyk made this absolutely awesome video featuring the Edwards and Young Modified Production 1957 Chevy and tipped us off to it. It was great that he did because this video is 100% BangShift perfection in virtually every way. The car has amazing history, and the video shows Roger Young in the car dumping the clutch and ripping the Doug Nash five speed through the gears at Pacific Raceway in Washington State. We’d go on and on, but Fedyk provided us with an awesome history and list of specs on the car courtesy of the driver Young. Here’s what he said about where the car came from and here’s what’s powering it now:

I purchased the 57 from Jim Green ( Green Elephant funny car ) while I was serving in Vietnam as a Scout Crew Chief (helicopter mechanic) for A Troop, 3/17th Air Cavalry in 1970. Jim’s machinist Ron Moses was racing it in the stock classes with a 265 and 4-speed. After I was discharged from the Army I started racing it in 1972 in E/MP with a 292 ci SBC and 4-speed with a Olds/Pontiac rear. When aerodynamics became a problem we went bracket racing with the car. In 1993 we back-halved the car and put in a Ford 9″ and mini-tubed for larger tires and installed rear coil-overs. We ran it for many years with our 331 (327 +.030) and installed a Doug-Nash 5-speed that has a 3.11 1st gear behind a Ram Ford Long-style clutch. This year we built the 350 with the Wiseco 13.2:1 pistons, .043/.043/3mm ring package and coated skirts. We use a 6″ Manley aluminum rod, a Lunati 50128 705 lift roller with a Jesel belt drive, Scat crank, and fully ported OLD Dart Sportsman II heads with 1.625 springs. The fender well headers are 1-7/8″ Kustom We’re still using our old Weiand Pro Tunnel Ram, 2-660 carbs from our MP days. I shift it at 7700 with a LONG shifter, and it goes through the lights at 8500 with the current gearing. Best pass with the 350 is 10.49 @ 128 and the car weight with me is 3586#. I’m turning 66 in August and we live in West Seattle, WA. I’m a retired automobile mechanic, the father of three children and six grandchildren and married to my lovely wife and best friend, Pam who also served in the Navy during the Vietnam war.

PRESS PLAY BELOW TO SEE THE EDWARDS AND YOUNG 1957 CHEVY –

Rhinoplasty, Stat: Foose Takes On The Challenge Of Making The Pontiac Aztek Pretty Classic YouTube: Selling Binders On The Television

3 thoughts on “Make A Few Runs In The Edwards And Young Modified Production 1957 Chevy – HUGE RPM!”