The Parting Shift: Ride Along In A 1955 Chevy Powered By A Rev Happy 283 Small Block 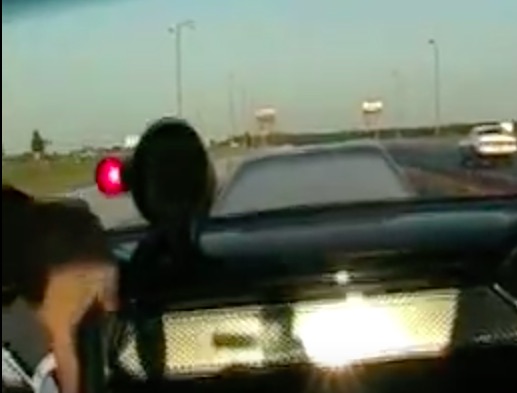 So we’re at St. Louis and then heading to No Mercy shortly after that. Boy there are some HUGE engines and HUGE power on display here. Whether we’re talking the monster motors in top fuelers, some of the bigger inch stuff in super class cars, or whatever we’re going to be looking at when we get to South Georgia Motorsports Park, we’re loving it all.

While we’re certainly fan of tug boat sized iron, there’s just something about a little small block that makes its power at rpm levels where angels fear to tread and that’s the story here with this week’s Parting Shift. You’ll sit inside a 1955 Chevy equipped with a 283 and a four speed, as well as a maniacal driver who literally treats this thing like he hates it.

The big block/small block preference is a wholly personal thing and because we love ’em both we’re not going to declare one superior to the other. What we will say though is that the sound of this car will curl your toes and make you smile. If you are like us and the local strips are all boarded up for winter, this is a welcome dose of straight line horsepower to get you through this Friday and onto the weekend.