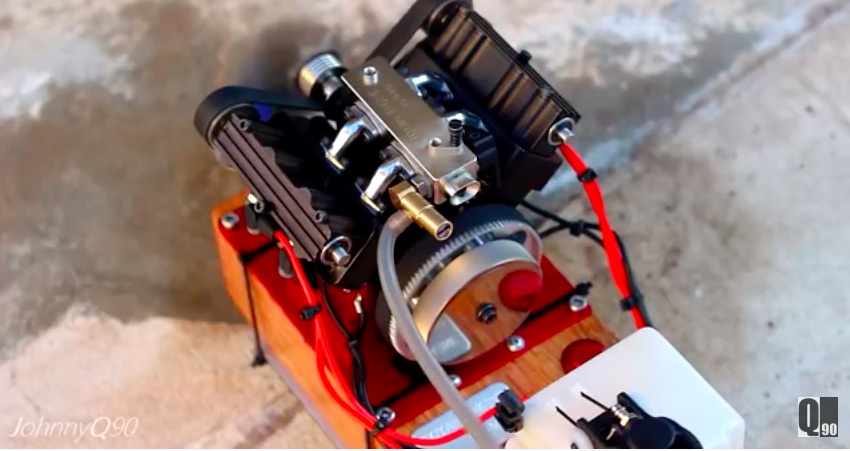 The Toyan Engine company is a name that we had never heard before until, well, today. That’s when we stumbled upon a large group of videos showing off various miniature engines. We did some research and discovered Toyan is a Chinese outfit that specializes in selling tiny, multi-cylinder engines for enthusiasts of hardcore RC cars or people who apparently just like to have neat little engines sitting around. The video we have below was not made by Toyan but rather a guy who has a channel specifically built around miniature engines. He unboxes a Toyan, puts it together, and makes it run. This is an interesting watch.

The engine shown here is a FS-V400. This is a 14cc, 3.2hp rated, four stroke, four cylinder engine. The fuel can be methanol or methanol and nitromethane. Obviously there isn’t a dyno here to show off but what we can tell you is that the tester in this video runs the little engine on a 30% load of the good stuff and boy does it sound neat!

The engine has its own starter, runs off of glow plugs, and has a rated redline of about 10,000 rpm. These things are designed to be used as static display engines but they can also be used in RC cars. The company makes all different kinds of engines and we’re going to be digging deeper into their catalog here shortly. Kind of a neat thing, right?

Check out the video below and tell us what you think.

Laughing Legends: Listen To Bobby Unser and Parnelli Jones Tell Stories About Andy Granatelli The Parting Shift: Ride Along In A 1955 Chevy Powered By A Rev Happy 283 Small Block