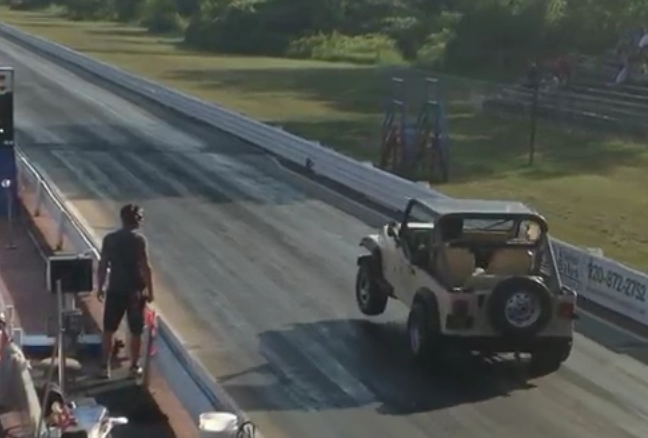 The Jeep YJ may not be the most loved version of the Wrangler but there’s at least one guy out there who liked it enough to hot rod his into Parting Shift fame! Yes, this YJ Wrangler is powered by a 451ci Chrysler stroker. That engine is backed with an 833 four speed manual transmission and that is backed up with a 4.10 geared Dana 60 rear axle. As you will see in the video, the Jeep hooks hard enough to pull the front end and the driver shifts it quick enough to hustle down the strip in what looks to be 11 or 12 seconds. For some reason the guy shooting the video pulls the camera about two nano-seconds before the time would have appeared on the board. Out estimate came from watching the clock on the video player and watching the Jeep cross the finish line.

This thing looks like it would be an absolute riot on the street, particularly because there is nothing that makes it stand out from a typical Jeep other than the oversized rear tires that most regular people would probably never notice anyway. The body is stock, the interior looks stock, and while the engine has some rumble it does not sound like a pro mod or something idling so the shock and awe factor of blowing off a late model Camaro or Mustang would be high for sure. We’re guessing that this guy has certainly had a couple of “kills” that he remembers on the strip or between stoplights.

We’re hoping more video of this Jeep emerges because this one was just published little more than a week and a half ago. There has to be photos or build threads or SOMETHING that shows off this Jeep sleeper from hell, right? C’amon internet super friends, throw us a bone here in the comments!

PRESS PLAY BELOW TO WATCH THIS JEEP FLY DOWN THE STRIP –

Crazy Video: Watch A 3,000hp Pro Extreme Door Slammer Suffer A Driveshaft Failure During A Run It's Dyno Time For The Skid Factory's MR2! How Does The Fresh Four-Banger Do On The Hub Dyno?