Best of 2019: Take A Closer Look At The Larry Peternel Imperial Pro Stocker! 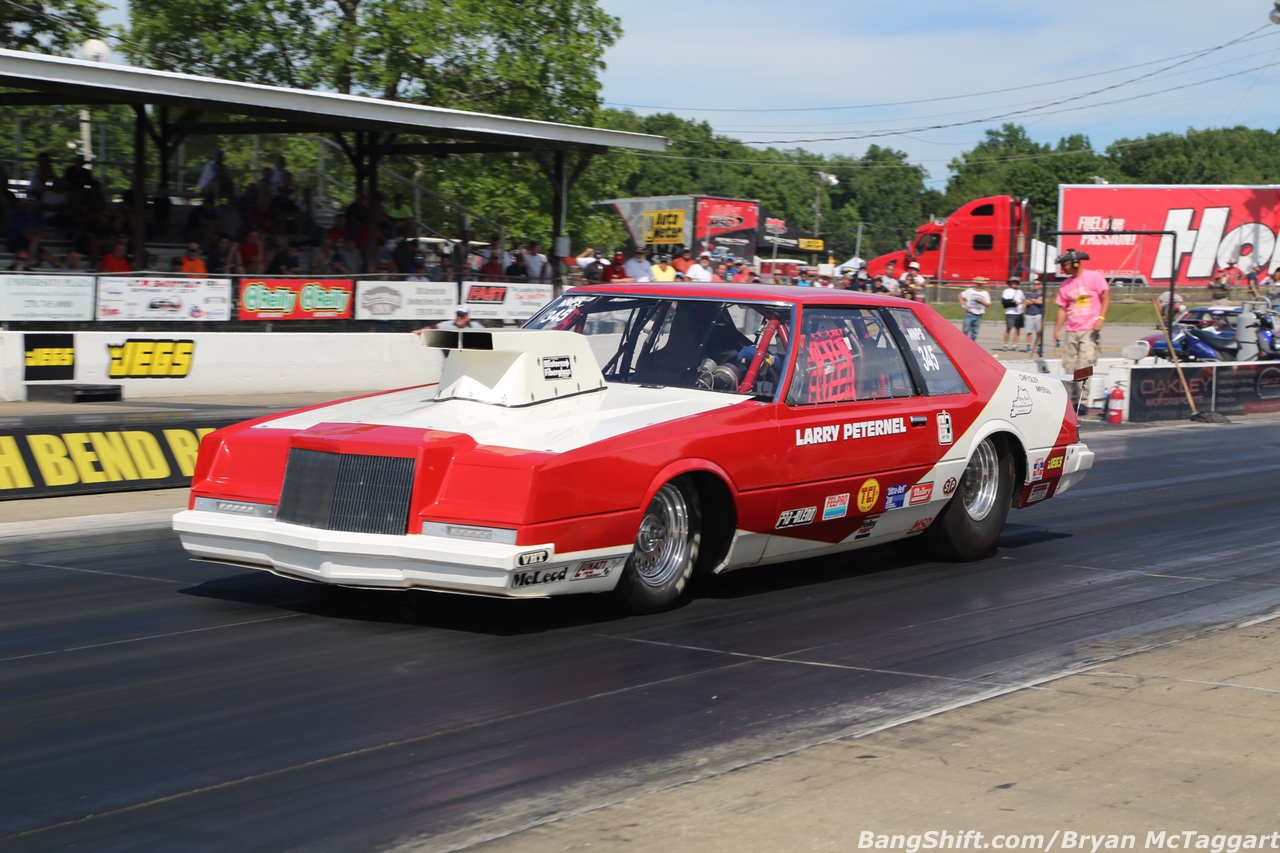 Robert Frost is one of America’s great poets, a man whose work with the written word became so much more than simple scribbles on paper. From the publishing of his first work, “My Butterfly. An Elegy” in the November 8th, 1894 edition of the New York Independent until his death in 1963, poetry was everything in his life. He spoke of ordinary life, of people and life in New England around the turn of the 20th century. One of his most famous poems is “The Road Not Taken”, a poem that is often misconstrued by it’s last stanza:

“I shall be telling this with a sigh/Somewhere ages and ages hence:
Two roads diverged in a wood, and I—I took the one less traveled by,
And that has made all the difference.”

-“The Road Not Taken”, Robert Frost 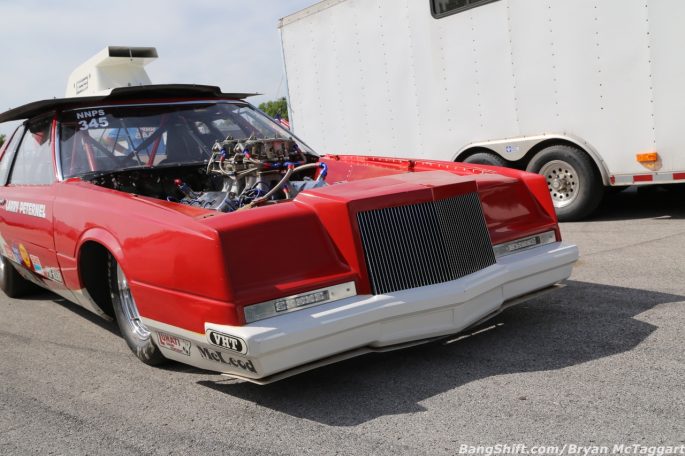 Often, the meaning is interpreted as an urging by the narrator to forge your own path, to not follow the crowd. The truth was that the last verse was a nod to Frost’s friend Edward Thomas, who was known for his habit of looking at the other choice in any decision made wistfully, thinking that maybe he should’ve picked the other option instead. 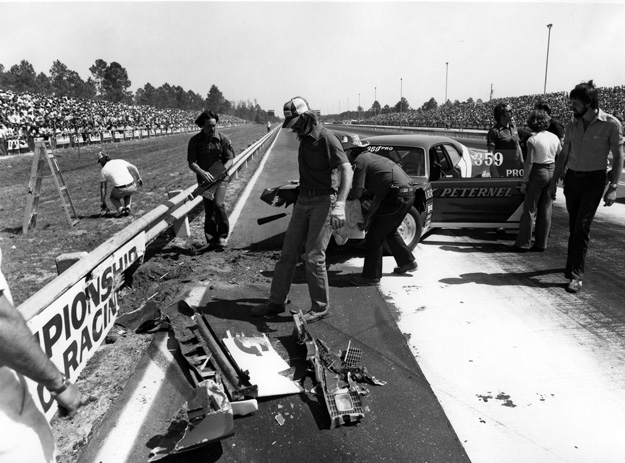 How does that apply to Larry Peternel? There isn’t much to find about Peternel…he campaigned Chrysler products in Pro Stock in the Seventies, including a Plymouth ‘Cuda and a Plymouth Duster, and from what can be found, he ran a very small outfit on a thin budget with a couple of guys who had their kit together. In a sea of 18 wheeler car haulers, Peternel’s combination camper truck/ramp truck stood out among the crowd. So, what would a racer from Wisconsin with a thin budget be doing building a race car out of a J-body Imperial? Seems counter-intuitive, especially when more Mopar Pro Stock drivers of the day were running Plymouth Arrows, or Dodge Omnis, doesn’t it? Well, that answer isn’t clear. It’s obvious from this classic photo that Peternel’s Duster got a bad case of concrete poisoning at one point, but the photo claims that this is the 1981 Gatornationals. 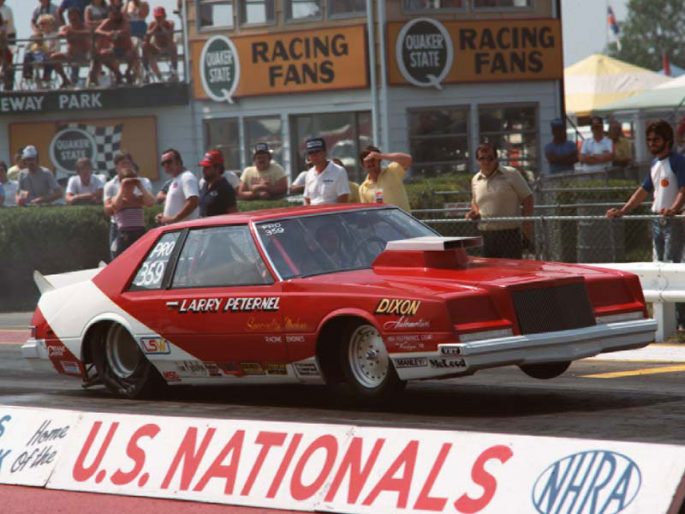 With the Duster body about aged out of competition, it would make sense for Peternel to look for a new platform, but instead of going with the smaller cars for a power break, for reasons that are unknown to time, he instead went for the newly re-launched Imperial. Keep in mind that the Imperial cost somewhere between $18,000-$20,000 brand-new during the 1981-83 production run. Those numbers aren’t corrected, either…you were $18K lighter after picking one up in 1981. We simply don’t know why he chose the Imperial. Maybe it was the length or maybe the look appealed to him. Either way, the car was gutted, tubbed, caged and prepared to run as a potential Pro Stock car. And here’s where I’m going to let those who were there argue about it: I can only find one time that the Imperial ever showed up to an NHRA race. Again, it’s the 1981 Gatornationals, according to history from a different source. What’s to be believed? Maybe one of you historians can put that question to rest. Why didn’t Peternel go for a lighter Arrow or Omni? I couldn’t tell you, reader, and I wish I could. 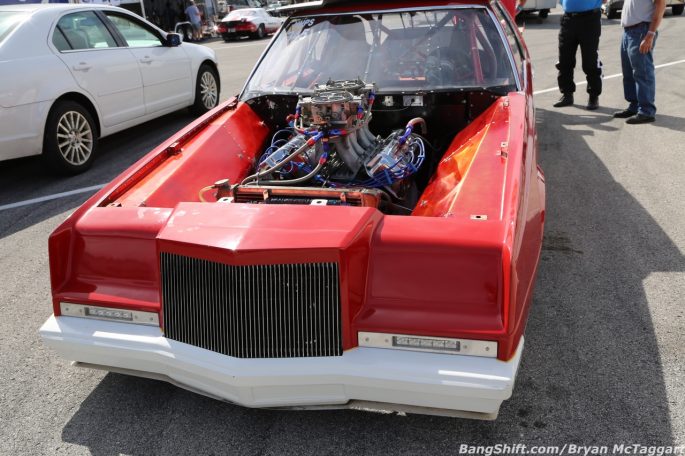 Either way, Peternel built the car in 1981, reportedly with panels that came from folks who were running the Imperial in  NASCAR (remember, Buddy Arrington, Rick Baldwin and Cecil Gordon ran the J-body Imperial in NASCAR and ARCA competition at this time), and used a 496ci Hemi with twin split Dominators on top. Peternel ran the car through 1985, winning a Division 3 points meet and placing runner-up at an AHRA event. In 1987, Larry Gates bought the car from Peternel and brought it to Kentucky. The car was converted into a bracket racer for some time and ran several engines, including a big-block Chrysler and a big-block Chevrolet at one point. About three years ago Gates decided that it was time to get the Imperial back into order. A 396ci de-stroked Hemi was originally used, but that was sold off and now resides in a period-correct Dart Sport build. Currently, a 432ci Hemi sits underneath that scoop, backed with an ATI Powerglide and a Mark Williams Ford-based rear with 4.56 gears. The 432 Hemi will be used to shake down the Imperial before an aluminum 528ci Hemi is introduced into the engine bay. And shakedowns are needed…shortly after the first run I saw, Gates and driver Billy Peach were sorting out an electrical issue that was messing with the Imperial’s cooling system. It’s a fresh build, and the Hot Rod Reunion was really the first set of runs for the car after the Imperial’s overall freshening. 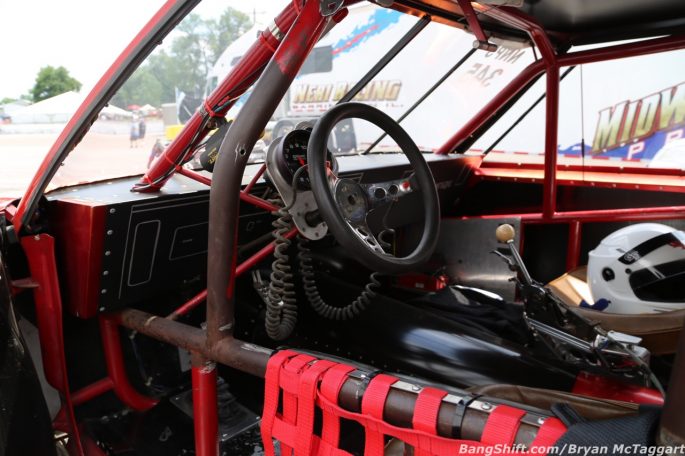 A Nostalgia Pro Stock Imperial was the last car I ever expected to see at the Holley Hot Rod Reunion. Up to that point, I had only seen one photograph of the car, ever. Yes, I’ve become a bit of a geek for these cars ever since I got my hands on my copy, and I have a pretty good grasp on all of the modified cars: Mark A. Johns’ 24 Hours of LeMons racer, the Arrington Imperial and the other circle track cars, Larry J. Pontnack’s “Mopar City Missile” Imperial that ran at Byron Dragway, Bob Lupini’s “Imperial Outlaw” racer, a former Chrysler show machine turned Pro Mod-style racer, and the beautiful Pro Street 1981 Imperial owned by Ted and Beverly Wozniak. Seeing them on the internet is one thing. Seeing one idling down towards the burnout box at Beech Bend is another. If the car is composed from NASCAR slabs, then whoever made the castings nailed it…the lines are just about spot-on and damn if I can’t tell the difference without parking my car next to it. Inside, it’s all business, but someone went to the trouble to make a fake dash face, complete with a drawn-out digital dash, vents and other details that match up to the street car. In fact, the only details missing between my own car and this one are the replaced front marker lights, the missing opera lamps (between door glass and quarter glass) and the half-painted grille surround that isn’t sporting the crystal Pentastar. The Imperial is so much like any surviving road-going example that they asked if I could help them find a new set of taillights to replace the worn and cracked examples the car wears. 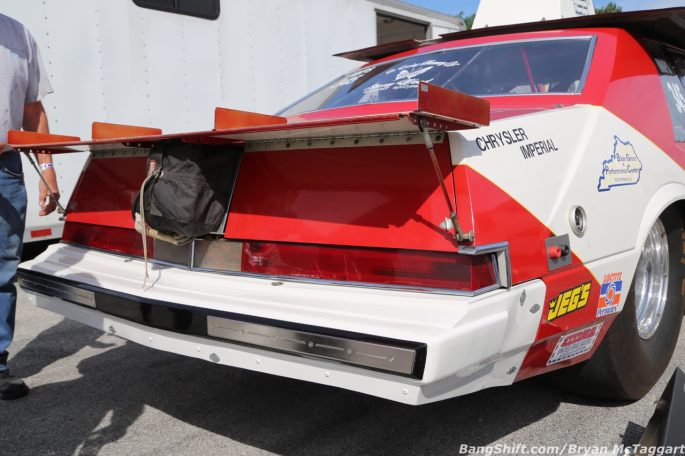 Two roads diverged in a wood, and Peternel chose the path less traveled. Seeing the honestly aggressive face of the Imperial come into view with a Hemi soundtrack playing, there is no doubt that made all of the difference, and why the underdog racer had a strong following. Nostalgia Pro Stockers are badass and we’ve been making the call for more and more of these machines to come out of the woodwork and to rejoin the fun. We’ve seen Camaros, Firebirds, Arrows, and more come out of the woodwork, but to see a car that I thought existed only in photographs anymore was a mind-bender.

Money No Object: 1958 Plymouth Fury - The One And Only... Best of 2019: A Chevy Malibu That The Yellowjackets Have Claimed For Their Own

9 thoughts on “Best of 2019: Take A Closer Look At The Larry Peternel Imperial Pro Stocker!”