The Rudezon Lives! Here’s The Scoop On The 2-Stroke V8 Powered Volvo From Sweden 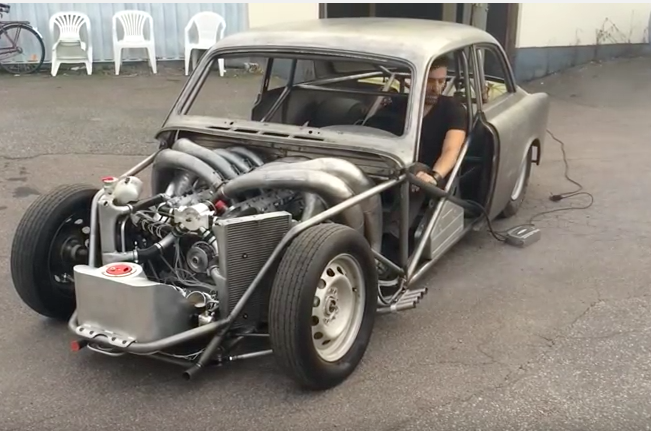 It was about a year ago that we first told you about the Rudezon, a classic Volvo Amazon that was being fitted with a 2-stroke V8 engine with the intention of using it as a drag race car. The company building the car is VM Performance and they are over in Sweden. Using a modified Evinrude 300XP engine, these guys are going to have an ear slipping and likely pretty quick little hot rod on their hands. While we can’t say for certain why they went with a freak show engine we do know it has gained them international notoriety on the internet. That’s a win. Those huge and hand made expansion chambers sure look cool, don’t they?

To clear up a misconception that seems to keep popping up with this car, these guys did not scratch build a two stroke V8 engine. Instead they found the best two stroke V8 ever made for converting into a car engine….an Evinrude boat motor. For real. Introduced in 1985 the 3.6L GT and 3.6L XP engines were sold through Johnson and Evinrude and in factory trim they were rated for 275hp. Apparently the rating was really soft from the factory and the output was closer to 300hp. We have seen video of the VM Performance guys making nearly 400 horsepower out of theirs. Insanity, right? All of this coming form a naturally aspirated engine that measures about 240ci! The sound the car makes is pretty nasty, like a bunch of unmuffled chainsaws ripping at once.

The fabrication work on the car looks amazing from the tube chassis to the split radiator to those big expansion chambers. We can’t wait to see it completed with a hood and nose on it and then see what it an turn for elapsed times at the strip. If the engine does make about 400hp and it is in a car that light, it should really fly.

Oh, you may be wondering why the end came for these engines in boats. Basically the same power could be made with the same or less displacement with the introduction of port fuel injection in the 1990s. Mercury introduced engines that were smaller, more efficient, and at the same powerful as the Evinrude/Johnson V8. Such is the nature of progress, right?

Fred Williams, Fresh From Watching Mad Max, A Ragged Out 1973 Road Runner, And The New Cummins 5.0L V8 Diesel...Yeah, This Will End Well! Video: The Longest Burnout In History Might Also Be The Funniest!

3 thoughts on “The Rudezon Lives! Here’s The Scoop On The 2-Stroke V8 Powered Volvo From Sweden”